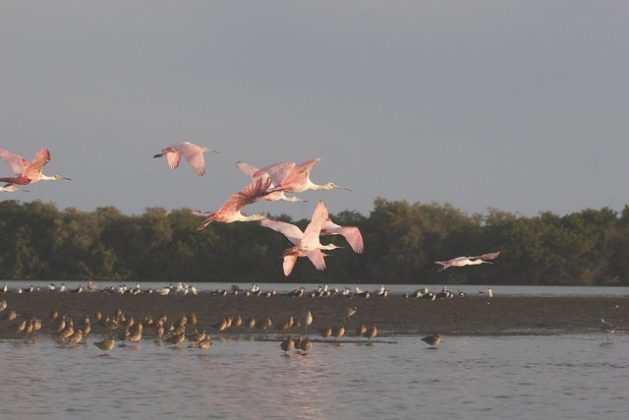 PARIS, May 7 2019 (IPS) – An alarming report about the massive loss of biodiversity around the world warns that future generations will be at risk if urgent action isn’t taken to protect the more than one million species of plants and animals threatened with extinction.

Such extinction could happen “within decades” and could affect 40 percent of amphibian species, more than a third of marine mammals and nearly 33 percent of reef-forming corals, said the Intergovernmental Science-Policy Platform on Biodiversity and Ecosystem Services (IPBES).

“Biodiversity is important for human well-being, and we humans are destroying it,” Sir Robert Watson, the outgoing chair of the IPBES, said as the report was launched Monday, May 7.

The body, formed in 2012 and comprising more than 130 government members, stated in its comprehensive review that nature is “declining globally at rates unprecedented in human history”.

The IPBES Global Assessment Report added that the rate of species extinction is also “accelerating”, and that this entails serious effects for the world’s human population as well, with an increasing impact on food, water and energy security, and on peace and stability.

“It’s a security issue in so far as the loss of natural resources, especially in poor, developing countries, can lead to conflict,” Watson said.

In a media briefing at the end of a six-day plenary—hosted by the United Nations Educational, Scientific and Cultural Organisation (UNESCO) in Paris—scientists called for bold measures at all levels of society to save the planet’s biodiversity, putting the issue at the same level of urgency as climate change.

“Unless we act now, we will undermine human well-being for current and future generations,” Watson said. “It’s a moral issue: we should not destroy nature. And it’s an ethical issue because the loss of biodiversity hurts the poorest of people, further exacerbating an already inequitable world.”

While climate change up to now has not been a dominant factor in biodiversity loss, it is expected to equal or surpass the issues of overfishing, pollution of sea and land (with toxic waste, plastics and heavy metals), the spread of invasive species decimating native ones, and the destruction of natural forests, the IPBES said.

Scientists said the “picture is less clear” for insect species, but the available evidence points to about 10 percent being threatened.

IPBES experts further state that at least 680 “vertebrate species” (or species with backbone) have been driven to extinction since the 16th century, and more than nine percent of all domesticated breeds of mammals used for food and agriculture had become extinct by 2016, with at least 1,000 more breeds still threatened. This has happened at a faster rate than in previous eras.

The 455 experts involved in the report analysed upwards of 15,000 scientific papers among their fields of research, said IPBES Executive Secretary Anne Larigauderie. They ranked the five “direct drivers of change in nature with the largest relative global impacts” on the world’s estimated eight million species.

These five drivers are: changes in land and sea use; direct exploitation of organisms; climate change; pollution; and invasive alien species, according to the report.

Ocean pollution, with toxic waste and tons of plastic devastating marine life, is now common knowledge, but perhaps people are less aware that the use of fertilisers has created some 400 coastal ecosystem “dead zones”, affecting 245,000 square kilometres.

Despite the disturbing statistics, Larigauderie said the IPBES still wished to send a message of hope.

“We don’t want that people feel discouraged, that there’s nothing that can be done, that we’ve lost the battle, because we’ve not,” she said.

Conservation efforts over the past decade have reduced the extinction risks for mammals and birds in 109 countries, and more than a hundred highly threatened birds, mammals and reptiles are “estimated to have benefitted from the eradication of invasive mammals on islands”, according to IPBES experts.

They emphasised that there was still time to give nature a chance to recover if the world takes transformative action for global sustainability, including the use of renewables, ecological farming methods and reducing run-off pollution into oceans.

“What we offer is scientific evidence never put together before,” said Eduardo S. Brondizio, one of the three co-chairs of the report and professor of anthropology at Indiana University.

“This is evidence that can be taken seriously, and people can be awakened to take action,” Brondizio told IPS. “This report is important for change.”

During the briefing at UNESCO, Brondizio had clear words for society at large and for the financial sectors and policy makers.

“We need to change our narratives,” he said. “Both our individual narratives that associate wasteful consumption with quality of life and with status, and the narratives of the economic systems that still consider that environmental degradation and social inequality are inevitable outcomes of economic growth.”

“Economic growth is a means and not an end,” he added. “We need to look for the quality of life of the planet.”

He said that “positive incentives” were required to “move away from harmful subsidies” that were contributing to unsustainable business models.

The report says there has been a 15 percent increase in global per capita consumption of materials since 1980 and a 300 percent increase in food crop production since 1970, reducing the habitat of some species and causing pollution through fertilisers.

Among the “cross-sectoral solutions” that the report proposes, Brondizio highlighted complementary and inter-dependent approaches to food production and conservation, sustainable fisheries, land-based climate-change mitigation and “nature-based” initiatives in cities – which is crucial for overall sustainability.

He pointed out that over the past decade, the “largest portion of urban growth has been in the urban South”, with the largest portion being among the poor who live in cities with stressed environmental issues.

If adequate action isn’t taken to halt the loss of biodiversity in cities, to deal with climate change and to improve quality of life for urban residents, the negative impact will be globally felt, he said.

Brondizio equally called for the need to recognise the knowledge, innovations and practices, institutions and values of indigenous peoples and local communities.

“They are equal partners in this journey, and we need their inclusion and participation in environmental governance,” he said.

Also addressing the report, UNESCO’s Director-General Audrey Azoulay stressed the importance of education in ensuring sustainability and of sharing knowledge to heighten awareness.

“Following the adoption of this historic report, no one will be able to claim that they did not know. We can no longer continue to destroy the diversity of life. This is our responsibility towards future generations,” she said.