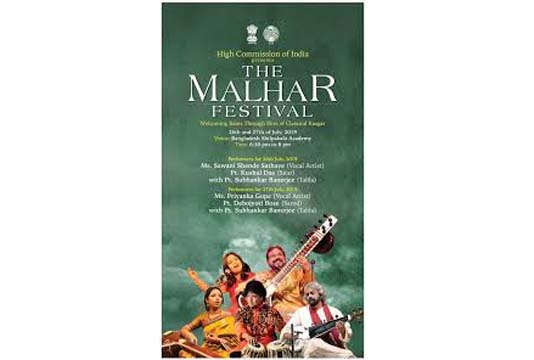 The Assistant High Commission of India (AHCI), Khulna in association with Udichi Shilpigosthi, Khulna is organizing
the ‘Malhar Festival’ for the first time in Khulna city on July 28.
Assistant High Commissioner, AHCI, Khulna R K Raina revealed this at a press conference here this afternoon.
He said two highly renowned artists from India — Pandit Debojyoti
Bose (Sarod) and Pandit Subhankar Banerjee (Tabla) — will be performing at the musical festival.
The festival will be held from 6:30 pm to 8:30pm on July 28 at CSS Ava Centre, 82 Rupsha Strand Road.
The Malhar Festival is a musical bonanza that welcomes rain through blissful classical raag. This festival presents a great opportunity for the people of Khulna to witness well-known artists from India rendering some of their best compositions. It also is a great learning experience for music enthusiasts who love classical music.
R K Raina said Khulna is considered to be the capital of folk dance and classical music and, hence, the Malhar Festival has been organized to
celebrate the cultural-spirit of Khulna, reports Bss from Khulna.