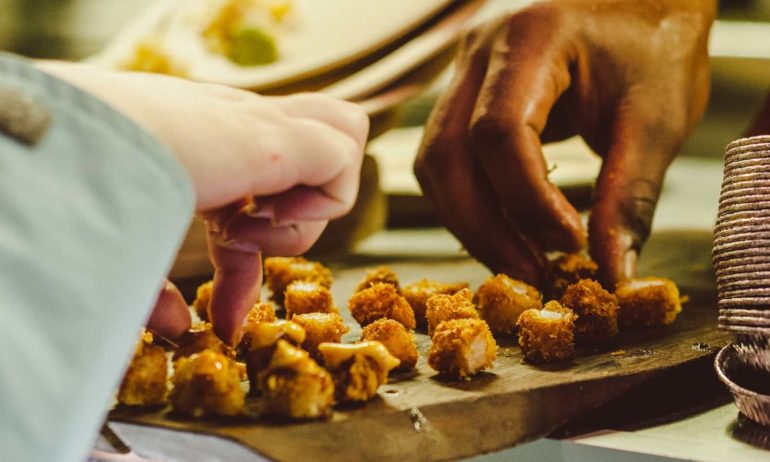 From Danielle Nierenberg
Greetings from Baltimore!
Diets and lifestyles like veganism, vegetarianism, and the Mediterranean Diet help eaters reduce meat consumption and protect the planet. One of these diets, flexitarianism, may make it easier for even committed meat eaters to eat sustainably. But instead of periodically switching out meat products for vegetarian alternatives, products like blended meats allow flexitarians to fuse meat and plant-based ingredients for tasty—and more sustainable—meals.
Projects like the World Resources Institute’s Better Buying Lab and the James Beard Foundation’s Blended Burger Project are pressuring chefs and food service providers to come up with the best recipes for blended meats like beef and mushroom burgers. Now, meat producers Tyson Foods and Perdue are expanding blended meats for home cooks with chicken nuggets, tenders, sausages, and patties that feature peas, chickpeas, or cauliflower.
Although blended meats cannot satisfy the concerns of people rejecting meat to challenge the livestock industry’s animal treatment, the products can help environmentally-conscious eaters limit their environmental footprint. According to the U.N. Food and Agriculture Organization, the livestock industry represents 14.5 percent of all anthropogenic greenhouse gas (GHG) emissions. But by committing to a flexitarian diet, eaters can reduce their diet-related GHG contributions by up to 15 percent. And by providing eaters more omega-3s and dietary fiber, and limiting saturated fat, the alternatives may be healthier for both people and the planet.
Contributing Author: Katherine Walla
While vegans and vegetarians already see plant-based meats go mainstream, semi-vegetarians—or flexitarians—find new blended meats appearing on market shelves. Recently spearheaded by companies like Tyson Foods, Inc. and Perdue, the blended meat products combine meat with plant-based ingredients.
To deliver blended-meat products, Tyson Foods built the Raised & Rooted brand. Initial products include plant-based nuggets and blended burgers featuring a blend of pea protein and other plant ingredients. The company’s already-established brand Aidells will launch a line of “Whole Blends” including blended chicken and plant-based sausages and meatballs. The newest products will release incrementally beginning late this summer and continuing into the fall, just after Tyson Foods sold its 6.52 percent share in Beyond Meat in April 2019.
Tyson Foods’s announcement on June 13 recognizes a segment of the consumer market that still consumes meat but desires alternative protein options for health benefits. According to Tyson Foods, the blends will have fewer calories and less saturated fat; the nuggets also contain more omega-3s and more fiber. Although plant-based meat accounts for just under one percent of all retail meat dollar sales, the Good Food Institute indicates that 11.9 percent of all United States households purchased plant-based meat over a year—and the number is increasing.
“There’s a lot of messaging that plants are powerful. It feels like something that gives you a quick fix, something is really good for you,” says Melanie Bartelme, a global food analyst with the consulting firm Mintel. According to Mintel’s 2018 Plant-Based Proteins in the U.S., 88 percent of U.S. consumers identify plant-based proteins as healthy options.
While Tyson Foods is the latest company to tap into the market, the announcement follows Perdue’s announcement only a day earlier. Perdue, a major chicken, turkey, and pork producing is not only appealing to the plant-based food trend, but also hopes that the blended nuggets, tenders, and patties help flexitarian families get their children to eat vegetables. “Not only are we helping to meet demands for millions of parents but we are appealing to the growing number of flexitarian families who have an increased commitment to getting more plants and vegetables in their families’ diets,” says Eric Christianson, Perdue’s Chief Marketing Officer.
Through a partnership with The Better Meat Co., Perdue’s blends deemed “Chicken Plus” will feature cauliflower, chickpeas, and other plant proteins. Each serving of product also includes a half-serving of vegetables. Perdue will officially release the products in September 2019.
While the blended options may not satisfy the concerns of people eating plant-based meats to challenge the livestock industry’s treatment of animals, they may appeal to those choosing flexitarian diets for benefits. Partially replacing meat with plant-based ingredients can help consumers limit their contributions to diet-related greenhouse gases by up to 15 percent. According to the World Resources Institute (WRI), replacing every burger Americans eat with burgers that are 30 percent plant-based may conserve 83 billion gallons of water per year, equivalent to 2.6 million American’s yearly household water use, and reduce agricultural land demand by 14,000 square miles, an area larger than the state of Maryland.
Tyson Foods and Perdue may be the most recent participants in blended meat, but companies and organizations already entered the market—which can amount to a US$140 billion market over the next decade, according to analysts from Barclays. WRI’s Better Buying Lab worked with companies and partners in the culinary world to scale a beef and mushroom burger that meets consumer demand for sustainable foods—while maintaining a meaty taste and texture. Food services provider Sodexo, member of the Better Buying Lab, started blending mushrooms into burgers as early as 2016 and announced the meat in burger form, called “The Natural.” The food chain Sonic also debuted a menu featuring burgers, 25 to 30 percent made up with mushrooms.
The James Beard Foundation’s Blended Burger Project strives to improve burgers not only in but also in flavor by challenging restaurants to develop and sell a blended burger at least 25 percent mushrooms. The fifth annual project ends July 31, and awards US$5,000 to five winning chefs with the best recipes. “We wanted to show that non-commercial food service can do it just as well,” says Justin Robinson, a participating chef in St. Petersburg, FL. “The blend allowed us to offer our clients a burger that is healthier, more sustainable, and delicious to boot. It also didn’t hurt that it was outselling our regular menu burger nearly two to one.”
(Danielle Nierenberg is the president Food Tank)