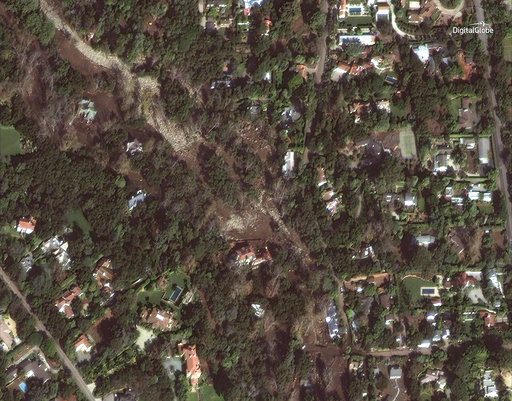 Montecito, Jan 13 (AP/UNB) – Most residents of mudslide-ravaged Montecito were under orders to clear out Friday as the search for victims dragged on and crews labored to clean up massive debris and repair power, water and gas lines.Even those who didn’t lose their homes in the disaster that left at least 18 people dead were told to leave for up to two weeks so they wouldn’t interfere with the rescue and recovery operation.
It was another frustrating turn for those living in the Southern California town that has been subject to repeated evacuation orders in recent weeks, first because of a monster wildfire last month, then because of downpours and mudslides.
Cia Monroe said her family was lucky their home wasn’t ruined and they were all healthy and safe, though her daughter lost one of her best friends.
But Monroe said it was stressful after evacuating three times during the wildfire to be packing up a fourth time. A family had offered them a room to stay overnight, but then they were looking at spending up to $3,000 a week for a hotel.
“Where do you go when you’re a family of four and you don’t have a second house?” Monroe asked, noting that some residents of town have third and fourth homes. “Financially that’s a burden.”
More than 1,200 workers taking part in the search and cleanup effort flooded into the town with a population of about 9,000.
Curious and concerned citizens who had trudged through the mud Thursday to view the devastation were nowhere to be seen as more firefighters in bright yellow rain gear searched methodically and utility crews in orange safety vests worked with chain saws and jackhammers.
A backhoe scooped up mud and rocks around buckled and flattened homes, while bulldozers cleared roads of tangled trees, muck and boulders. Tanker trucks were being used to haul off floodwaters sucked up from U.S. Highway 101, the crippled coastal route connecting Santa Barbara to Ventura.
Santa Barbara County Sheriff Bill Brown said residents who had stayed behind or tried to check on damage in neighborhoods where homes were leveled and car-size boulders blocked roads and littered properties had hindered the recovery effort.
On Thursday, Brown expanded what was known as the public safety exclusion zone to incorporate most of the town. That meant even those who had stayed behind would have to leave and those who entered the zone would be subject to arrest.
Residents who remained in town Friday were either seen packing their cars with clothing and other belongings for their latest evacuation or staying out of sight.
“It is a little frustrating,” said Sarah Ettman. “It’s martial law here, basically. You know there are looters being caught and there are so many gawkers and people that just have no business being in here.”
Rescuers were busy probing thick muck, swollen creeks and tangled trees with poles in search of five missing people while dogs sniffed for bodies.
A crew found the body of the 18th victim, Joseph Bleckel, 87, before noon in his home near Romero Canyon, Brown said.
The cause of Bleckel’s death wasn’t announced, but all other victims died from multiple traumatic injuries due to a flash flood and mudslides.
At the start of a news conference, Brown named six people still missing. He returned to the microphone moments later to announce that he had just received a call that a man feared missing had been found in a hospital out of town.
The five missing people included Fabiola Benitez, the mother of Jonathan Benitez, a 10-year-old killed in the flooding.
Benitez lived with her sister-in-law, Marilyn Ramos, 27, who was asleep with her daughter, Kaelly, 3, when mud crashed through their Montecito rental home, carrying both to their deaths.
“My sister was such a good person, she only thought of others to the point that she would cry with you when you were hurt or sick,” said Ramos’ sister, Jennifer Ramos, pausing to sob for several seconds.
The husbands of both women and the 2-year-old son of Fabiola Benitez, were hospitalized with injuries, Ramos said.
Drenching rains that unleashed the deadly torrents managed to finally contain the largest wildfire in state history, which burned for weeks above Montecito and stripped the steep hills of vegetation, making it prone to mudslides. The U.S. Forest Service announced Friday that the fire that burned 440 square miles (1,140 square kilometers) was fully contained.
While Montecito is best known as a getaway for the rich and famous — the median home price among current listings is more than $4 million — there are also working families living in modest houses and apartments.
With most utilities out of commission or about to be cut off, staying behind was not an option for many.
Ettman’s home was undamaged, and her section of town still had gas and electricity, even though nearby Romero Creek was choked with cars, trees and rocks.
But with gas and power expected to be shut off Saturday and sewage running into the nearby creek, she decided to heed the order to leave.
“I mean you’re losing all your basic health and sanitation services,” she said. “When those go down, you have to leave.”