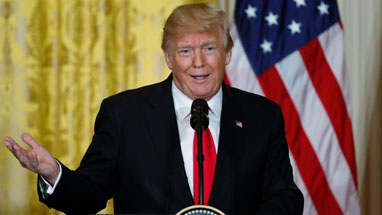 Washington, Jan 11, 2018 (BSS/AFP) – President Donald Trump said on Wednesday that the United States could “conceivably” return to the Paris climate accord, although he stopped short of signaling any move in that direction.“Frankly, it’s an agreement that I have no problem with, but I had a problem with the agreement that they signed, because, as usual, they made a bad deal,” Trump told a news conference.
“So we can conceivably go back in,” added the president, who announced his intention to pull out of the 2015 accord on curbing global warming emissions last June.
The process of leaving is long and complex, and Trump’s comments will renew questions about whether he actually intends to withdraw or simply wants easier US emissions targets.
A full US pullout could jeopardize global efforts to limit average warming to under two degrees Celsius (3.6 degrees Fahrenheit) over pre-Industrial Revolution levels.
Standing alongside Norwegian Prime Minister Erna Solberg, Trump presented himself as a champion of environmentalism.
“I feel very strongly about the environment,” he said. We “want to have clean water, clean air, but we also want businesses that can compete.”
“One of the great assets of Norway is a thing called water,” Trump said. “They have tremendous hydro power, tremendous. In fact most of your energy or your electricity is produced by hydro. I wish we would do some of that.”
The US president has at times seemed torn between advisors like his daughter Ivanka, who advocate for policies that mitigate the effects of climate change, and aides who believe international accords hold America back.
In the year since coming to office, Trump’s administration has worked to ease environmental legislation, which industry considers a burden on growth.
“The Paris Accord really would have taken away our competitive edge. And we are not going to let that happen,” he said.