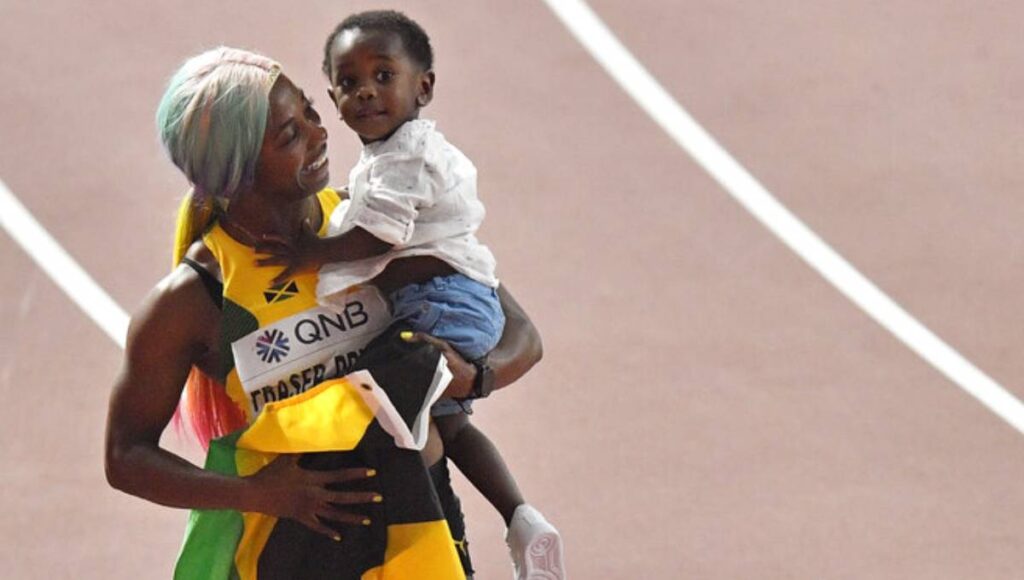 Doha, Sep 30 (AP/UNB) — Only moments after Shelly-Ann Fraser-Pryce zoomed past the finish line Sunday night, she scooped up something more precious than gold. Her 2-year-old son Zyon came down to the track to join her for the victory lap. What a fitting way to celebrate the Jamaican speedster’s fourth and hardest-earned 100-meter title at world championships.
“A victory for motherhood!” Fraser-Pryce said.
Sure is. And if 2019 has been the Year of the Mother in track and field, then Sunday was Mother’s Day.
Only moments before Fraser-Pryce — this time with her long hair arranged in a rainbow-pastel pastiche — blasted past the field in a season-best 10.71 seconds, new mom Allyson Felix surpassed none other than Usain Bolt with her record 12th gold medal at worlds. This one came in the brand new mixed relay, in which two men and two women team up for four trips around the track.
Felix was among the Americans who banded together in protest this summer, getting Nike to change a long-standing policy that stopped payments to pregnant athletes in this sport. Her 10-month-old daughter, Camryn, was with her at the stadium. Felix said she got goosebumps watching Fraser-Pryce cross the finish line first .12 seconds ahead of Dina Asher-Smith of Britain.
“What she’s done is amazing,” Felix said. “She’s had a hard road, too. She keeps encouraging me. Her first year wasn’t the best, but her second year, she’s better than ever. Women are amazing and she’s leading the way.”
Fraser-Pryce said she sat on her bed and cried the day she found out she was pregnant. Not too much after that, she heard people saying it might be time to quit.
“Everyone’s entitled to their opinion,” she said. “I knew how I felt and I knew I wasn’t ready to go. I had something left to do, and I stayed focused on the goal.”
And that, in many ways, has been the point of this year for her, for Felix, for any woman who has ever been told it’s over once she decides to start having kids.
Felix spent more than a decade cultivating a reputation as a classy champion, but a very private person. When she went public with her issues with Nike, it served as a tipping point to the movement begun earlier in the summer by Alysia Montano in track, and members of the U.S. women’s soccer team, who were fighting a similar battle on different turf for equal pay during their run to a World Cup victory.
All of it eventually made a difference — not only in the terms Nike was willing to rework in its endorsement contracts for elite athletes but in the message it sent about equality.
“I think everything I went through this year … it just brings it all back that it’s so much bigger than myself,” Felix said.
There were others competing in the quarter-full stadium Sunday night, including Christian Taylor, who won his third straight triple-jump world championship.
And pole vaulter Anzhelika Sidorova of Russia, who cleared 4.95 meters to beat American Sandi Morris for the gold. Sidorova is competing as a neutral athlete because of Russia’s doping problems and will receive her medal Monday night with the IAAF’s “anthem,” not Russia’s, playing in the background.
Another mother won gold in the women’s 20-kilometre walk early Monday morning. Liu Hong of China took the 2017 and 2018 seasons off to have a child before returning triumphantly in 2019. She led a Chinese podium sweep.
Another gold medalist was Courtney Okolo — Felix’s 25-year-old relay teammate.
“It’s definitely an inspiration to all women,” Okolo said of the 33-year-old Felix. “You see the journey she’s been on this year, and now you’re seeing a lot of women can do that and come back successfully. I know that when the time comes for me to have kids, it’s something I can do, as well.”
Between them, Fraser-Pryce and Felix have piled up a combined 27 medals at world championships over the past 14 years. They are, by almost any measure, the two most dominating sprinters of their time.
Even so, these two golds are destined to stand out for them, mainly for the work they put in simply to make it back to the track.
On top of the normal stresses of pregnancy, both women delivered via cesarean sections that ravage the core muscles critical for sprinters trying to burst out of the blocks.
“For 10 weeks, I couldn’t lift weights (while lying) on my back,” Fraser-Pryce said. “And mentally, it’s even harder because you’re 30, you’re having a baby, the females are out there running fast. You wonder if you can come back. For me, I just worked really hard.”
Felix’s baby came two months prematurely and spent around a month in the neonatal intensive-care unit.
“It puts things in perspective,” Felix said.
Any doubts about what this night was all about were more than put to rest as Fraser-Pryce circled the track, with Zyon resting his head on her shoulder.
So many Jamaican victory laps in the past — whether by Bolt or Fraser-Pryce, who now has a total of eight world golds to go with two from the Olympics — have been topped off with Bob Marley tunes to fuel up a crowd on its way to a party.
This time, it was a selection from “The Lion King” playing over the PA system as the sprinter they’re now calling the “Mommy Rocket” exited stage right with her son in her arms.
The song: “Can You Feel the Love Tonight?”