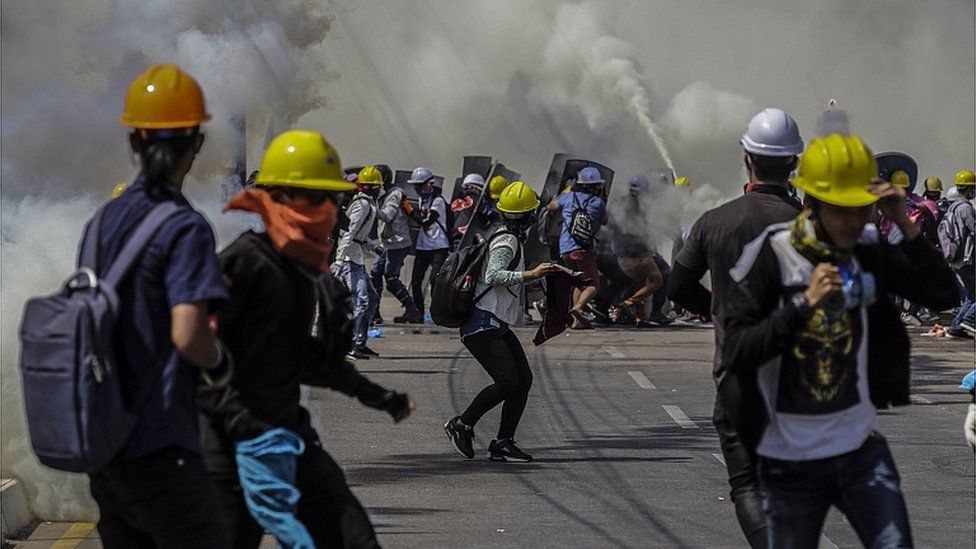 Myanmar has asked neighbouring India to return several police officers who crossed the border seeking refuge after refusing to carry out orders. Indian officials said the officers and their families had crossed the border in recent days.
In a letter, Myanmar authorities asked for their return “in order to uphold friendly relations”.
Myanmar has been gripped by mass protests and strikes following a military coup last month.
Security forces have taken a hard line against the demonstrations and at least 55 deaths have been reported.
Police carried out raids overnight on Saturday in the largest city, Yangon, ahead of further protests in defiance of the military.
Video footage showed security forces repeatedly firing at buildings as they moved into one street to make arrests.
Hours later, thousands of demonstrators had gathered again in Yangon and the city of Mandalay.
It followed demonstrations across the country on Saturday, with police in Yangon using tear gas, rubber bullets and stun grenades to disperse crowds, reports said.
There were no reports of fresh casualties.
Deputy Commissioner Maria CT Zuali, a senior official in Champhai district in the Indian state of Mizoram, told Reuters news agency that she had received a letter from her counterpart in Myanmar’s Falam district requesting the return of the police officers.
The letter said that Myanmar had information about eight police officers who had crossed into India.
“In order to uphold friendly relations between the two neighbour countries, you are kindly requested to detain eight Myanmar police personnel who had arrived to Indian territories and hand-over to Myanmar,” the letter read.
Ms Zuali said she was awaiting instructions from India’s home affairs ministry in Delhi.
According to Reuters, about 30 people including the officers and their family members have crossed the border into India seeking refuge in recent days.
On Saturday, scores of other Myanmar nationals were waiting at the border hoping to flee the turmoil, AFP news agency reported, citing Indian officials. – BBC News