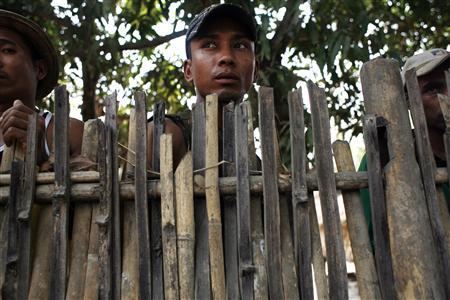 Three Muslim men peered over a bamboo fence built recently to fortify their village in central Myanmar. They gazed across dry rice paddies towards a nearby Buddhist community, looking for rising dust, a sign of an approaching mob.It was a false alarm. But a day earlier, on Wednesday, about 100 Buddhists armed with sticks had gathered outside the fence, threatening to burn the village and kill them, said the villagers of Win Kite, about a two-hour drive from Myanmar’s largest city, Yangon.
Police foiled that attack. But Muslims were taking no chances after four days of mob violence led by Buddhist monks in Meikhtila in March killed 44 people, mostly Muslims, and touched off a wave of unrest in central Myanmar that threatens to derail the country’s nascent economic and political reforms.
“We have a plan to defend ourselves if they come and attack us,” said Kin So, adding that many in Win Kite had armed themselves with clubs and swords as a precaution for when troops and police patrolling the area pull out.
The five-foot (1.5 metre) fence encircling Win Kite is a vivid illustration of divisions between Myanmar’s Muslims and majority Buddhists that are beginning to cause problems elsewhere in Southeast Asia.
Indonesian police said on Friday they had foiled a plan to attack Myanmar’s embassy in Jakarta, arresting two men late on Thursday and seizing explosives.
A spokesman told reporters the suspects had planned the attack in protest at the treatment of Rohingya Muslims in Myanmar. At least 192 people, mostly Rohingya, were killed last year in clashes with Buddhists in Rakhine State.
In April, eight people died when Muslim and Buddhist refugees clashed at an Indonesian immigration centre.
On April 30, one man was killed in riots in Oakkan and nearby villages just 100 km (60 miles) north of Yangon, when a Muslim woman bumped into an 11-year-old novice monk, who dropped his alms bowl, damaging it.
The authorities are aware that such mundane incidents can spiral out of control in the present environment. A district officer said a measure that stops crowds from gathering had been imposed in Taikkyi, a town near Oakkan, as a precaution.
Presidential spokesman Ye Htut said in a Facebook statement the authorities had averted trouble in the city of Mandalay when three motorcyclists rode through a Muslim neighbourhood shouting that Buddhist monks had come to burn down their houses.
“Security personnel went to the site immediately and explained that it was not true,” Ye Htut said. “They assured the people of security. An investigation is going on to expose and detain these instigators.”
Yangon’s deputy police commissioner, Thet Lwin, told Reuters 18 people had been arrested in connection with the Oakkan riots, including the woman who inadvertently started them, charged with “deliberate and malicious acts” that insult religion.
“According to our practice, we need to send her for trial since she was involved in the root cause of the incident,” he said, adding that although she had bumped into the monk by accident, it was up to the court to decide her fate.
In the village of Win Kite, a 45-minute drive down dusty roads from Oakkan, 40 members of the security forces guaranteed peace – for now.
On Wednesday, police managed to push the mob back to Sa Phyu, a Buddhist village about a half hour’s walk away. There they calmed the crowd, which agreed not to attack the Muslims, according to Deputy Commissioner Thet Lwin.
One man from Sa Phyu, who would not give his name because he feared arrest, confirmed the police had prevented the attack.
A Reuters investigation found radical Buddhist monks had been actively involved in the violence in Meikhtila in March.
People interviewed in Sa Phyu denied any involvement with monks and said there had not been any meetings or phone calls on Wednesday, adding some 700 Buddhists had gathered spontaneously from various villages in the area
Myint Shwe and fellow Muslims in Win Kite fear the mob will return and they remain virtual prisoners beyond their bamboo fence.
“Now we have police and military so it’s safe,” he said. “But when the security forces go back, we don’t know what’s going to happen.”
(Source: Reuters via Google News)