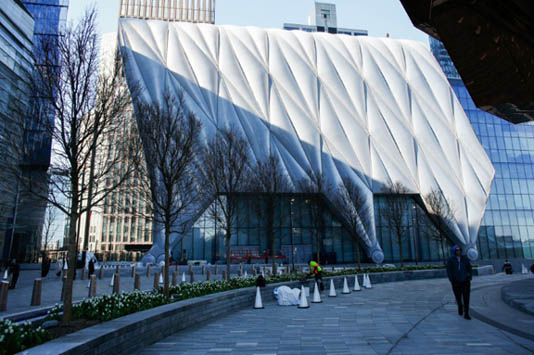 A sparkling new addition to New York’s cultural offerings will open Friday, a highly anticipated interdisciplinary complex aiming to be an every man’s art space in the upscale Hudson Yards real estate development.
The futuristic Shed institution, constructed on a 20,000-square-foot, city-owned lot, is intended as the “cultural beating heart” of the controversial Hudson Yards, whose sea of corporate offices, high-end stores and pricey restaurants has been criticized as a playground for the rich.
The much-hyped arts complex — which resembles something of a giant box nestled in a shimmering silver puffer jacket — will debut this week with a celebration of African American music directed by British Oscar winner Steve McQueen, and a set of theatrical concerts from the eclectic Icelandic performer Bjork next month.
“We’re not retro-fitting,” said Alex Poots, the Shed’s founding artistic director.
“We’re trying to purposely create a program that really represents a wide spectrum of artists and society.”
As its inaugural season of nearly all newly commissioned work rolls out, the Shed appears intent on offering an antidote to criticism of the Dubai-esque Hudson Yards, where some apartments will go for $30 million.
“We try to make a place that has more equity than had ever been previously,” said the Scotsman, who previously served as artistic directors of the Manchester International Festival and New York’s Park Avenue Armory.
– Artistic toolbox –
While catering to everyone from public housing residents to the city’s glitterati is the goal, ensuring equal access in exorbitant Manhattan is a tall order.
Poots said all art gallery exhibits will be $10 and free for kids, while shows — including top billings like the Bjork — will see 10 percent of attendees pay just $10 for spots throughout the space.
“Not only are you creating access, but you’re creating meeting points for people of different backgrounds,” Poots said at a Shed preview Wednesday.
The Shed’s name embodies its ethos, its mastermind Dan Doctoroff said, acting as an artistic toolbox of sorts, or as he puts it, a “Swiss army knife for culture.”
The eight-floor complex features two sprawling column-free galleries, a 500-seat theater that can be divided in two, a creative lab and rehearsal space and a 17,000-square-foot hall for large-scale performances, which can be covered by a telescopic shell that can also nest over the building to open a plaza for outdoor events.
The Shed is largely the brainchild of its now-chairman and president Doctoroff, a businessman who served as deputy mayor under New York’s Michael Bloomberg administration and 23 years ago kicked off a bold plan to rebuild the city’s West side in pursuit of an Olympic bid.
That effort failed, but the area of midtown Manhattan’s rail yard already re-zoned for development would become Hudson Yards — and blueprints included plans for an arts institution that then lacked vision.
– Cultural ‘start-up’ –
Elizabeth Diller, the building’s chief architect, recalls that in 2008, the project was but “a dotted line with a question mark” labeled “cultural facility” — just as the city faced the height of the recession “and the project seemed improbable.”
“As we all know, art is the first to get cut when there is an economic crisis.”
But Doctoroff’s bold dream got a kickstart from Bloomberg, whose administration — which made funding the arts a cornerstone of his tenure, in a city eager to revive its global powerhouse image in the post-September 11 years — appropriated an initial $75 million in public funds to the arts organization as he left office six years ago.
In 2017, the billionaire dropped another $75 million, this time of his own money, which snagged him the building naming rights.
“It was an opportunity to do a building from scratch… a start-up if you will,” architect Diller told AFP of what some are calling the city’s greatest cultural structure since the Lincoln Center complex that opened in the 1960s.
– Leading edge –
Fundraising has covered the building’s initial costs, which have crawled towards $500 million. Doctoroff owed the hefty gifts supporting the building to the Shed’s mission to “be different” in a city already rife with cultural institutions.
The complex has the ability to “change over time and keep New York on the leading edge,” he said, calling that cultural prowess “essential to New York’s competitive position.”
Part of that means searching from within, said civic programming head Tamara McCaw, who has led the Shed’s Open Call program to support emerging artists in the city who might not have the economic resources to get going, including recruiting among its public housing residents.
“The context of New York City — it’s what drives us to make sure this space belongs to everybody,” she said.
“That gets reflected in who works here, what’s the program, who gets to curate.”
For Doctoroff, it’s an “obligation” to “let people know that not only are they welcome, but they’re going to play an important part in helping us to define who we are,” reports AFP, New York.