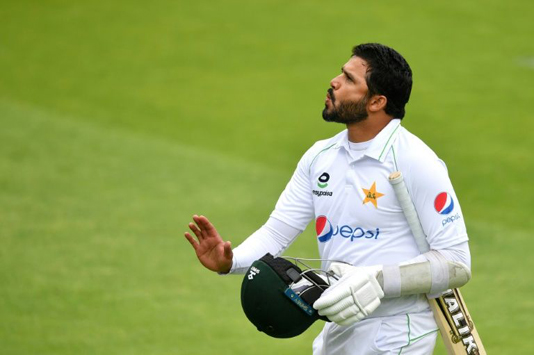 Pakistan captain Azhar Ali insisted there was all to play for following a dramatic three-wicket loss to England in the first Test at Old Trafford, where his side were “one punch away” from victory.England, chasing a target of 277 — only one higher total has been achieved to win in the fourth innings of a Test at the Manchester ground — were in trouble at 117-5.
But a sixth-wicket stand of 139 between player of the match Chris Woakes, who finished on 84 not out, and Jos Buttler (75) changed the course of the game during Saturday’s fourth day.
It was a particularly bitter defeat for Pakistan as they had been the better side for much of this Test.
– ‘Knockout’ –
But the loss of several wickets late on Friday during an eventual second innings of 169 cost them dear in a match where Shan Masood made a Test-best 156 in the first innings and leg-spinner Yasir Shah took eight wickets in all.
Pakistan, who have not lost a series against England for 10 years, must regroup quickly before the second Test in a three-match campaign starts at Southampton on Thursday.
“It’s disappointing but not over yet, there are still two Tests to go,” Azhar told reporters.
“There a lot of positives from this game, we outplayed England on most parts of this Test match.
“I wouldn’t say we lost the match in (our) second innings, but we missed a chance to knock England out of the game there.”
Pakistan, however, were still in command during an England top-order collapse on Saturday that saw four wickets lost for 31 runs.
“We were sure we’d wrap it up if one more wicket fell,” said Azhar.
“But they (Buttler and Woakes) attacked from the off and snatched the game away from us.
“Sometimes you just have to give credit to the opposition.”
“We were in control of the game; we were one punch away from finishing the game off, but they came and dominated us during that period.”
Azhar, a specialist batsman, managed just 18 runs in a match where he was out for a duck in the first innings.
But although he has now scored a mere 139 runs in his past 12 away Test innings, Azhar denied captaincy was affecting his batting.
“When I bat, I’m not thinking about the captaincy, whether or not I’m out of form,” he said. “And when I’m captain, I don’t think about my batting at all, ” reports AFP.