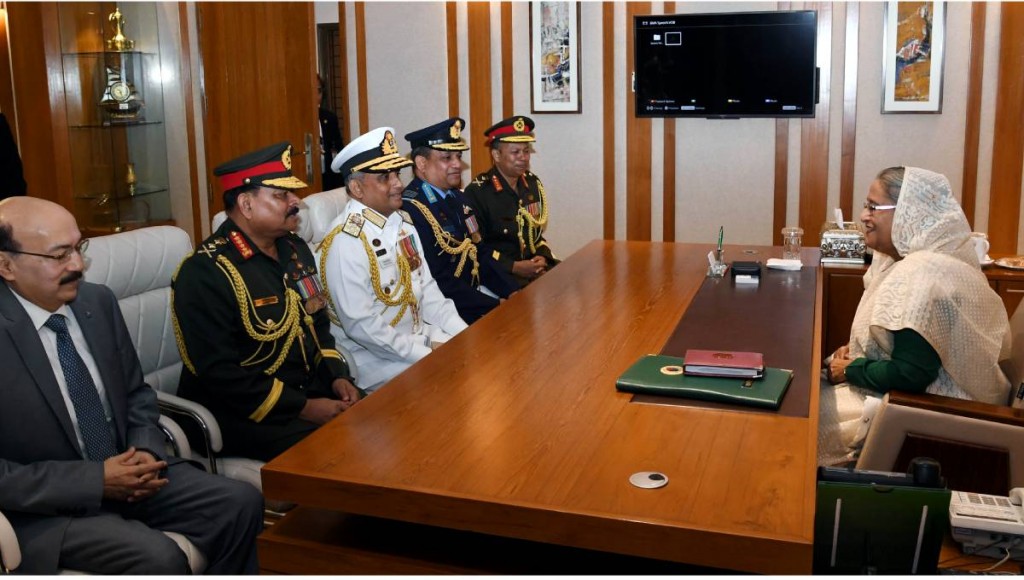 Prime Minister Sheikh Hasina on Sunday stressed the need for the participation the Armed Forces in overall development of the country.
“For the overall development of the country, we want the participation of the Armed Forces,” she said while exchanging views with officials and employees of the Armed Forces Division held at Multipurpose Hall.PM’s press secretary Ihsanul Karim briefed reporters after the programme.
In the next five years, the Prime Minister mentioned, the aim of the government will be completing all the mega projects taken in the last two tenures.She mentioned that the now the poverty level in the country is 21.8 and it has to be brought down by another five percent in the coming days. “We want to put the country at a place from where there’ll be no scope to step back.”
The defence is very much important for a country she said adding that the foreign policy of Bangladesh is ‘Friendship to all and malice to none’. “We don’t want war, but we have to prepare ourselves so that we could protect the country if we are attacked.”
Praising the role of Bangladeshi peacekeepers across the globe, she said the peacekeepers have to be provided with proper and time-befitting training before sending them abroad.The Prime Minister expressed her heartfelt gratitude to the people of the country for giving Awami League another chance to serve the country.
She mentioned that the centre of development in the coming days will be the grassroots level of the country.PM’s Security Adviser Major General (retd) Tarique Ahmed Siddiq, Chief of Army Staff General Aziz Ahmed, Chief of Naval Staff Admiral M Nizamuddin Ahmad, Chief of Air Staff Air Chief Marshal Masihuzzaman Serniabat and Principal Staff Officer (PSO) of the Armed Forces Division (AFD) Lt Gen Md Mahfuzur Rahman were, among others, present.