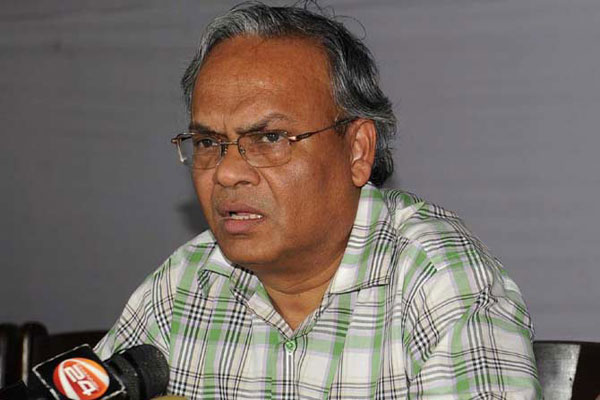 BNP on Monday alleged that Prime Minister Sheikh Hasina is making ‘mockery’ with people by seeking vote for her party after ‘snatching’ voting right.

Speaking at a press conference at the party’s Nayapaltan central office, BNP senior joint secretary general Ruhul Kabir Rizvi also alleged that the Prime Minister has clearly violated the election code of conduct by carrying out campaign for ‘boat’ in Chandpur after the announcement of the election schedule for two city corporations.

“It’s nothing but making mockery with people by seeking vote from them by a Prime Minister who has snatched their voting right,” he said.

Rizvi said the Election Commission has announced schedules for Gazipur and Khulna City polls just two days back. “The elections will be held under party line with their election symbols. So, if the Prime Minister seeks vote for her party’s election symbol boat anywhere in the country, it’ll be a violation of the election code of conduct.”

Referring to the Prime Minister’s comment that seeking vote for her party is her political right, Rizvi questioned why Sheikh Hasina is not carrying out the campaign for her party as Awami League president to exercise such right.

“The Prime Minister is spending public money, using public helicopter, circuit houses, government vehicles and protocols to reach rally venues. People want to know what kind of your political right it is to seek vote for Awami League availing of all state facilities,” he questioned.

He also came down hard on the Election Commission for what he said playing a silent role regarding the violation of the election code of conduct by the Prime Minister.

The BNP leader also alleged that the Prime Minister is spreading ‘blatant lies’ against BNP and its chairperson at her different programmes.

Earlier, on Saturday, Chief Election Commissioner KM Nurul Huda announced that the elections to Gazipur and Khulna city corporations will be held on May 15.

According to the election schedule, the deadline for the submission of nomination papers is April 12, while the dates for scrutinising those are April 15 and 16, and the last date for withdrawal of candidature is April 23.

BNP senior leaders at a meeting on Sunday night decided to join the city polls as part of their movement to ‘restore’ people’s voting and other rights.