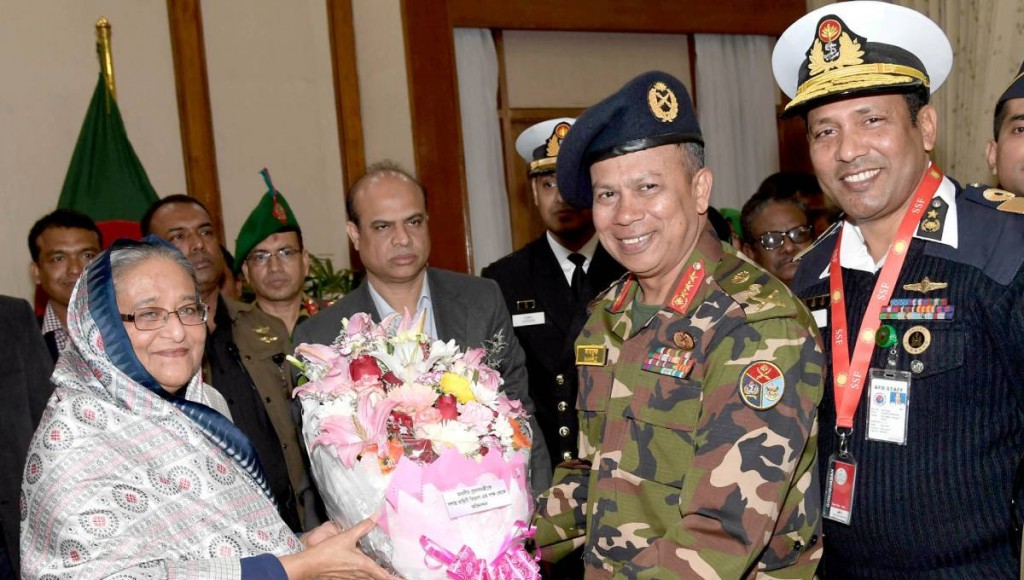 Prime Minister Sheikh Hasina on Wednesday sought cooperation from all, including the officials of public and private organisations, in establish a poverty- and hunger-free ‘Sonar Bangla’ as dreamt by the Father of the Nation.
The Prime Minister sought the cooperation when senior civil and military officials, individuals and leaders of various organisations, including Scouts and Girls’ Guides, Bangladesh, met her at her official residence Ganobhaban.
The retired officials and leaders of the Girls’ Guides greeted the Prime Minister by presenting bouquets on securing of her party’s landslide victory in the 11th national election held on Sunday.Sheikh Hasina said the victory of Awami League in the election was the result of coordinated efforts of the people of all walks of life.
Saying that her responsibility towards the country and its people has increased further after her party’s victory, the Prime Minister assured the country’s people of accomplishing the responsibilities to fulfill their desires, hopes and aspirations.
Hasina reiterated her strong stance against terrorism and militancy saying there would be no room on Bangladesh soil for such criminals.The Awami League President also extended her gratitude to those who came to congratulate her following the victory of her party in the election with absolute majority.
SDG Affairs Chief Coordinator Abul Kalam Azad, Education Secretary Sohrab Hossain and PSO of the Armed Forces Division Lieutenant General Mahfuzur Rahman were, among others, present.
When cross-section of people came to Ganobhaban to extend greetings to her on Tuesday night, Hasina said, “There’ll be no space for war criminals and anti-liberation forces on Bangladesh soil and the country will move only with the spirit of the Liberation War — it is the reality…we got that mandate from people through the polls.”
Ministers, political leaders, cultural personalities, artistes, poets, actors, singers, physicians, journalists, litterateurs, civil society members and senior civil and military officials greeted the Prime Minister by presenting bouquets.
Expressing gratitude to the country’s people for the Awami League’s landslide victory, Hasina said professionals starting from poets, artistes to litterateurs and even the common people were keen so that the Boat could win the elections.
She sought cooperation from the people of all classes and professions in maintaining the development and progress of the country.