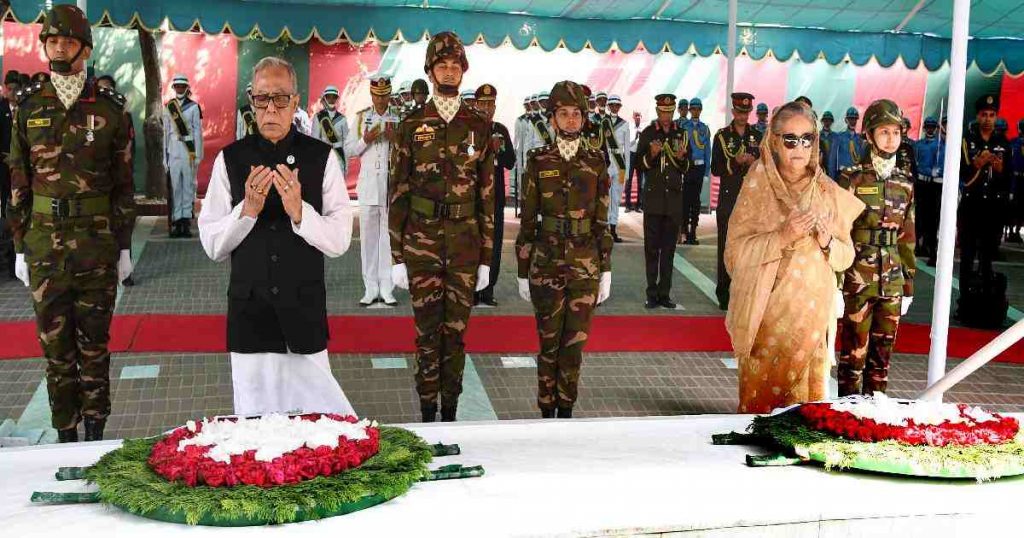 President M Abdul Hamid and Prime Minister Sheikh Hasina on Tuesday paid rich tributes to Father of the Nation Bangabandhu Sheikh Mujibur Rahman on the occasion of the birth anniversary of the great leader.

After placing the wreaths, they stood in solemn silence for some time as a mark of profound respect to the memory of Father of the Nation as the bugle played the last post.

A smartly turned out contingent drawn from Bangladesh Army, Navy and Air Force gave a guard of honour on the occasion.

Abdul Hamid and Sheikh Hasina offered Fateha and joined a munajat seeking eternal peace of the departed souls of Bangabandhu as well as other martyrs of the August 15 carnage.

Later, the President signed the visitor’s book kept on the mazar premises.

Flanked by senior leaders of the party, Sheikh Hasina, also the Awami League president, placed another wreath at the mazar of Bangabandhu on behalf of AL.

Taking family members with her, the Prime Minister placed another wreath at the mazar of Bangabandhu.

The Prime Minister flew to Tungipara after placing wreaths at the portrait of Bangabandhu in front of Bangabandhu Memorial Museum at Dhanmondi Road No 32 in the capital city.

The birthday of Bangabandhu is being observed across the country today as the National Children’s Day.