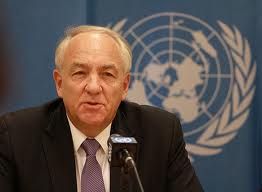 Visiting Ambassador at-Large for War Crimes Issues of the Office of Global Criminal Justice Stephen J Rapp on Wednesday expressed satisfaction over the progress in war crimes trial but voiced concern over the death penalty of the accused.“Fundamentally, I think, progress has been achieved…the set of recommendations that I made were incorporated. But I’m very concerned about the death penalty,” he told a press conference at the American Centre in the city.
Pressed for specific comments whether he is happy or not over the four verdicts, he said, “I’m not satisfied… I (also) do have satisfaction. But I think there is progress.”
US Ambassador in Dhaka Dan W Mozena and Press and Information Officer, US Embassy in Dhaka, Kelly S McCarthy were also present.
Responding to a question Rapp said he has to have trust judges to make decisions, and mentioned that people may not be happy, and can be emotional. “My hope and expectation are that the cases will be decided on the facts, not on polls, politics, or not on demonstrations (Shahbagh).
Asked again whether he is happy over the verdicts, he said the process is done. “It’s not me to say what I like particularly or dislike.”
He also said he does not want to get involved in this specific issue and it is up to them [judges] to make things clear with supportive facts against particular convictions.
Asked whether the verdicts were influenced by the Shahbagh movements Rapp said the Shahbagh movement had happened after Mollah (Quader Mollah) verdict. “Again I trust in judges…judges do not respond to politics…they respond to facts and laws.”
He also said in political process that may reflect on the decisions in terms of legislation as the legislators naturally respond to people.
On continuation of the trial, even after the change of power, Rapp said the trial is going to continue whatever happens in this election. “It’s my expectation, it would continue.”
He said this is a process and it should be done in such a way that it is not a question which party is in power but a question of establishing justice.
Rapp emphasised the proper scopes for the accused to defend and said allegations brought against the accused will have to be proved beyond question.
He highlighted four recommendations including maintaining international standards in the trial process and transparent trial and protection of accused’s social and political rights in line with the international convention.
Rapp said it is a historic process and hoped that the trial will yield results at the end and establish an example in the world.
Rapp had been in Dhaka thrice in 2011 to provide suggestions for the trial of war crimes suspects.
This time he came here on a two-day visit and witnessed the trial proceedings in the International Crimes Tribunals and trial process in the Supreme Court.
He also held a meeting with Law Minister Barrister Shafique Ahmed at the Secretariat. UNB