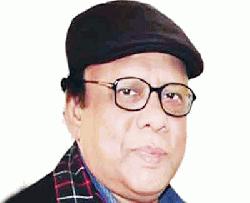 Noted music composer Selim Ashraf, widely known for the composition of famous patriotic song ‘Je Matir Buke Ghumiye Achhe Lokkho Mukti Sena’, passed away on  Monday. He was 74.He breathed his last at 3am on early Monday, Ashraf’s wife singer Alam Ara Minu confirmed the news of his death.
Ashraf was suffering from respiratory, blood and kidney problems for four years. He was admitted at the United Hospital in the capital in February last year and had a lot of trouble with medical treatment. Later, the prime minister provided him financial assistance for better treatment.
In his 50-year music career, Ashraf composed many popular patriotic and modern songs. Some of this notable songs include ‘Oi Je Dekha Jayre, Hijol Tolar Gaayre’, ‘E Amar Ohongkar Ami je Peyechhi Ekusher Moto’, ‘Ei Jibon to Onek Kichhui Chay’, ‘Je Batashe Phote Phul’ and ‘Ei Jaduta Jodi Sotti Hoto’.