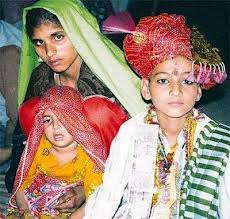 Speakers at a participatory discussion here yesterday said more responsive role of marriage registrar and imams including other community leaders has become an urgent need to control child marriage as it leads to various violence and repression against women.Terming the child marriage as the major violence and gross violation of human rights they said there is no alternative to check it substantially.Despite multifarious interventions by the government and non-government organizations concerned, the child marriage is taking place frequently. In this alarming situation, the mass-media should come forward positively, they added.The observations came at a workshop styled “Role of Marriage Registrar and Imams to resist Child Marriage and violence against Women” held at the conference hall of Deputy Commissioner of Rajshahi.Meyeder Jonnyo Nirapad Nagorikotto (MEJNIN)” programme organized the daylong meeting in association with Gender Justice and Diversity Division of BRAC where more than 65 registrars, religious and community leaders other stakeholders attended.Deputy Commissioner Mejbah Uddin Chowdhury addressed the discussion as chief guest while District Registrar Meer Mahbub Mehedi and Deputy Director of Islamic Foundation Abdus Shakur spoke as special guests.Editor of Daily Sonar Desh Akbarul Hassan Millat, Brac District Representative AKM Jahedul Islam and Programme Officers Rezwana Afroz and Ruhul Amin also spoke.The discussants viewed the country’s mass media both print and electronics have been playing a vital role towards mitigating regional and national level problems through objective reporting. So, why not the issue of child marriage and its consequences will be brought under media coverage adequately for its substantial and sustainable solution, they posed questions.The speakers said early marriage and the early pregnancy in particular have been posing a serious threat to the family planning activities, especially in the rural areas.Various government and non-government organizations are implementing different programmmes to resist early marriage but those aren’t yielding desired results as yet.They stated that utmost importance should be given to addressing the menace of early marriage of children. Otherwise, the family planning activities will go in vain. Apart from this, the violence against women couldn’t be reduced to a greater extent.The workshop followed by four group discussions where the participants put forward a set of recommendations on how to attain desired results in this regard. -BSS, Rajshahi