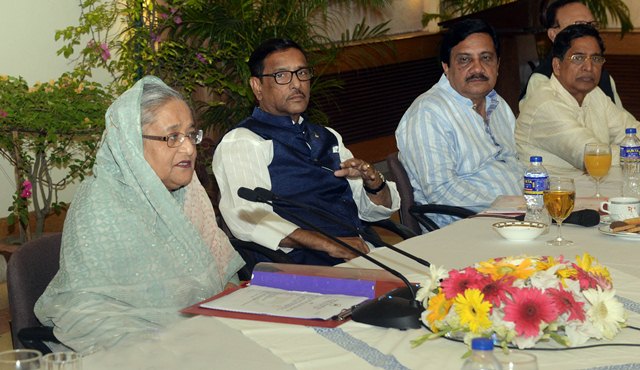 Prime Minister Sheikh Hasina on Saturday said seeking votes in favour of her party and its symbol is her political right and she will do that.

“Seeking votes for Boat is my right. I’m the head of a political party… so I’ll seek votes for my party wherever I’ll go, and this is my political right,” she said reacting to criticisms by BNP leaders.

The Prime Minister said this in her inaugural speech at the Awami League Central Working Committee (ALCWC) meeting at her official residence Ganobhaban.

Sheikh Hasina said the next general election will be held and all have to go to the people of the country for votes. “We’ll have to convince people that only casting votes for Boat can bring prosperity in their lives,” she said.

She mentioned that the people of the country got Independence, their mother tongue and development in rural areas after casting votes for Boat.

BNP leaders are constantly criticising the Prime Minister for seeking votes for Boat, the election symbol of AL, in the next election in various programmes across the country saying that Hasina is using state mechanism and money for her election campaign.

Sheikh Hasina, also the Awami League chief, said it is the responsibility and duty of her party to develop the county.

“The trust of people is our main fuel to do everything for them and the country,” she said.