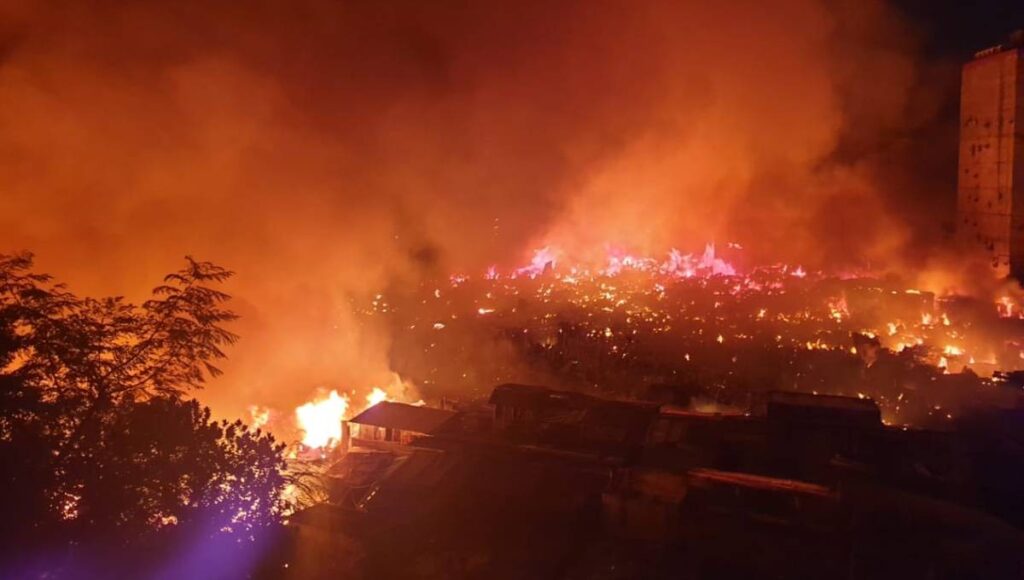 Dhaka, Aug 17 (UNB) – There is nothing new in slum fire in Dhaka city. When it happens, it leaves thousands of people in deep despair. Over 20,000 slum dwellers turned paupers within hours in Friday night’s fast-moving fire in the city’s Mirpur area.

“We’ve lost all that we had — fans, utensils, clothes and money whatever. We’ve been left with nothing,” said Khaleda Begum, a resident of the Chalantika Slum in Mirpur area.

Almost all the shanties — around 3,000 in number — were gutted by the fire that was doused after six hours of frantic efforts.

“I saw the fire erupting from a room owned by Farid and came out of the slum to save our lives leaving the belongings behind,” said a devastated Khaleda, 35, wife of rickshaw-puller Belal who used to live in a hut of the slum for Tk 2,700 per month.

She said she could save nothing of her belongings as she was more concerned about the safety of life.

Like Khaleda, all the inmates of the slum lost everything to the devastating fire that originated at a shanty around 7:22pm on Friday before being fully doused around 1:30am on Saturday.

Slum dwellers claimed that the fire originated from a room owned by Farid, a dentist quack, who possessed eight rooms at the slum. However, authorities concerned were yet to confirm it.

Minara Begum, 35, wife of Siddique Hossain, bought four rooms from Farid five months ago. She was living in two of those while the rest two were rented to others. “I saw flames flickering from a locked room owned by Farid and shouted for help.”

The fire might have been originated from a gas cylinder or electrical short circuit, she said.

Monwara Begum, wife of Iskander Shikder, who had been living in the slum for the last three decades, owned 12 rooms. She along with her five children and husband used to reside in two of them and rented 10 others out to others for Tk 1,000-Tk 2,000 each. “Everything I had got destroyed overnight,” she said.

Rehana, 30, along with her husband Jewel and two sons — Shaheen, 10 and Sabbir, 7 — had been living in a room at Tk 2,000 per month. “I stormed out of the slum along with my two sons as soon as I noticed the blaze without thinking of saving the belongings,” she said.

The slum was established on around 25- 30 bighas of government wetland where the influential built houses on bamboo and wood pillars and rented those out to low-income people. The slum had narrow entrances on all four sides.

Md Rezaul Karim, assistant director of Fire Service and Civil Defence, on Saturday morning said an investigation committee will be formed soon to find out the reason behind the fire.

Talking to reporters at the spot, the mayor said shelter centres were opened at local schools for the victims while the city corporation would arrange food for them.According to the World Bank, Dhaka has got a population of over 1.80 crore with some 35 lakh living in slums. UNB