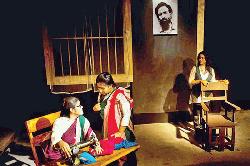 Cultural Correspondent
Shabdabali Theatre will start touring with their newest production ‘Baishakhini’ from today. The drama will be premiered at Bhola Zilla Shilpakala Academy in Bhola today. This is the 66th production from Shabdabali, the renowned theatre troupe based in Barisal. The drama is based on the history of Lady Freedom Fighters during 1971. Shabdabali hopes that the drama would revive the zeal for Liberation War among the young generation.
After the premiere show today in Bhola the stage will be taken to Patuakhali, Borguna in the division of Barisal. Then it will tour other divisional cities in Sylhet, Rajshahi, Chattogram, Rangpur, Mymensingh before finally reaching Dhaka. The famed playwright Chandan Sen of India has written the original story of the drama. Dr Mahfuza Hilali has revised and readapted it for modern times and Bangladeshi stage while Syed Dulal has directed it.