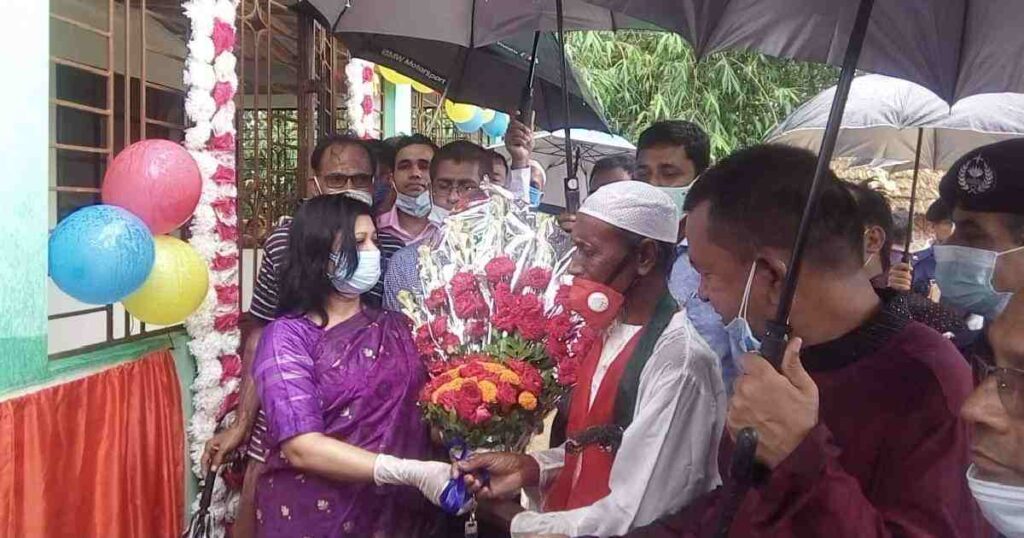 A beggar in Sherpur, who set a rare example by donating his savings to the government relief fund during the coronavirus pandemic, got a new house on Sunday as a gift from Prime Minister Sheikh Hasina. Sherpur Deputy Commissioner (DC) Anarkali Mahbub handed over the key of the house to beggar Nazimuddin at a function on Sunday.
Jhenaigati Upazila Parishad Chairman Md Nayeem, Jhenaigati Upazila Nirbahi Officer (UNO) Rubel Mahmud and Executive Magistrate Mizanur Rahman were, among others, present.
Anarkali Mahbub said the government has already given Nazimuddin a shop so that he can earn money through grocery business.
As per the directive of Prime Minister Sheikh Hasina, she said, the authorities have taken the responsibility of ensuring medical treatment for Nazimuddin and his family members.
Prime Minister Sheikh Hasina gave Taka three lakh to the local administration to build a house for Nazimuddin, and as per her directives, the house was built.
Earlier, beggar Nazimuddin donated Taka 10,000, which he had saved in two years for repairing his house, to the government relief fund for giving the money to the jobless, poor and destitute people hit hard in the wake of the COVID-19 outbreak.
The house, where Nazimuddin lived previously, was basically constructed on a khas land, although Nazimuddin did not know it. The government has also allotted 15 decimal of khas land to beggar Nazimuddin and the new house was built on this land.
While receiving the key of the newly built house, Nazimuddin, an inhabitant of Gandhigaon village under Jhenaigati Upazila, said he is very happy as he got a new house as the gift of the prime minister.
On April 22, 2020, the Sherpur district administration at a function also handed over Taka 20,000 to Nazimuddin for starting a grocery shop. – BSS