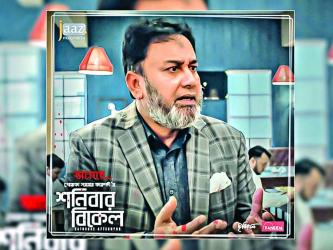 ‘Entertainment Desk
‘Shonibar Bikel’ selected for main competition A scene from the film ‘Shonibar Bikel’. -Collected
‘Shonibar Bikel’ (Saturday Afternoon), the first part of Mostofa Sarwar Farooki-directed identity trilogy series, jointly produced by Jaaz Multimedia and Chabial from Bangladesh, Tandem Productions from Germany as co-producer of the film. Berlinale-winning Kazakh cinematographer Aziz Zhambakiyev and veteran Russian cameraman Valerii Petrov worked as the Steadicam operator in the film.
‘Shonibar Bikel’ has been selected for the main competition category in the 41st edition of the Moscow International Film Festival (MIFF). The festival will be taking place from April 18 to 25 in Moscow, Russia.
The film ‘Shonibar Bikel’ casts Nusrat Imrose Tisha, Zahid Hasan, Mamunur Rashid, Nader Chowdhury, Intekhab Dinar, Iresh Zaker and Gousul Alam Shaon from Bangladesh, while Palestinian actor Eyad Hourani and Indian actor Parambrata Chatterjee are also among the other cast in the film.
The story of the film is similar to the subject of ‘Holey Artisan incident’, the tragic Holey Artisan attack that took place in Dhaka on July 1 in 2016. The film doesn’t mention the name of Holey Artisan at any point, and presented a different attack. The film did not receive clearance from the Bangladesh Film Censor Board for its country release due to complicated grounds.
The Moscow International Film Festival is one of the oldest in the world. For the first time it was held in 1935 with Sergei Eisenstein as chairman of the Jury. Nevertheless, Festival history is usually traced back to 1959, when it became a regular event.