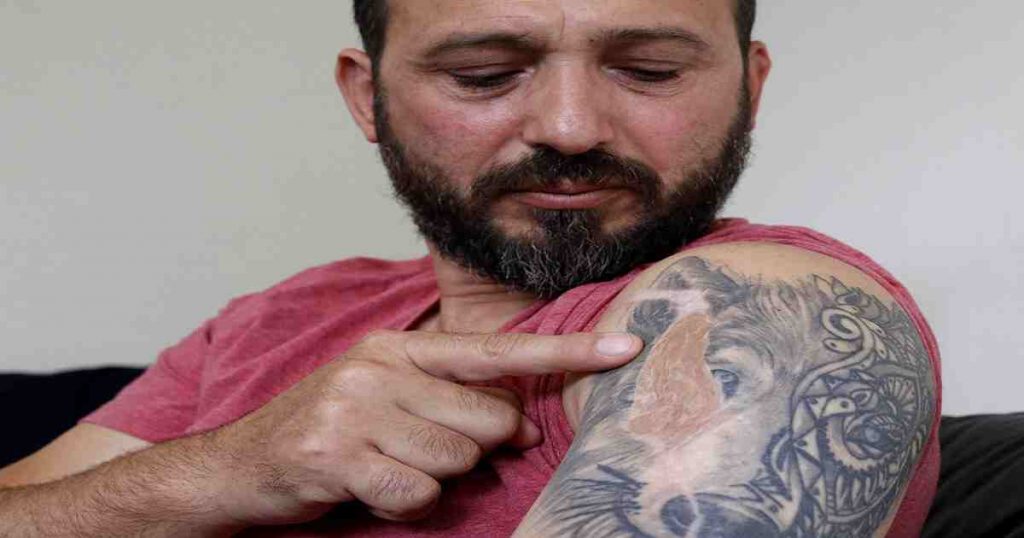 When the gunman walked into the Al Noor mosque, Temel Atacocugu was kneeling for Friday prayers. He looked up into the man’s face, thinking he was a police officer because of his paramilitary outfit. Time slowed. Atacocugu saw a puff of smoke come from the raised gun, felt a bullet smash into his teeth, and thought, “Oh, my God, I’m dying.”

But despite being shot nine times, Atacocugu survived the attack at Al Noor, one of two mosques in the city of Christchurch that were attacked on March 15 last year, in New Zealand’s deadliest modern-day mass shooting.

On Sunday, New Zealand will commemorate the 51 people who were killed in the attacks. Atacocugu, 45, is slowly overcoming his own physical and psychological injuries from that day. And he’s even found himself ready to face a childhood fear: sharks.

On the day of the attacks, Atacocugu was in a buoyant mood when he walked into the mosque. An active man who loves soccer, fishing and running, he’d just finished his last acupuncture session for a sports injury and was feeling in great shape.

Growing up in Turkey, he’d been through compulsory military training, so he quickly realized what was happening. Medical staff would later tell him he was incredibly fortunate that the bullet, which struck his upper jaw, deflected downward rather than continuing into his brain or an artery.

Atacocugu says that after that first shot to his mouth, he leapt up in shock and was shot four more times in both legs. People were screaming. Another worshipper rushed at the gunman and was killed, but it gave Atacocugu a couple of seconds to react, and to run as best he could.

There was no obvious way out, so he laid down motionless on the floor. He was later shot four more times in his left arm and leg as the gunman fired indiscriminately into the piles of bodies.

Atacocugu spent a month in a hospital and underwent four operations that included bone and skin grafts. He’ll need at least three more surgeries in the months to come.

“The biggest change after the attack was that I can’t be free the same as before,” Atacocugu says. “Because very limited moving around. And I was feeling like a little baby, because somebody has to look after me all the time.”

Yet his physical recovery a year later is remarkable. The wheelchair and cane are gone. His left arm remains weakened, but when he walks down the street or plays with his Labradoodle dog, Max, Atacocugu’s limp is barely noticeable.

A few weeks ago, he started playing soccer again with a group of his friends, joking that these days he’s being outrun by fit men in their 70s. In one game, he showed off his skills by tackling, spot kicking and back-heeling a pass.

Atacocugu’s mental recovery is taking longer. He’s been seeing a psychologist who’s helping him work through the images and flashbacks that still haunt him.

“He’s trying to pull out the dark spot from my brain,” he says.

Atacocugu has experienced bouts of depression and has been taking antidepressants since the shooting. He figures he’ll need to keep taking the medication for at least another year. He’s found that his memory and ability to concentrate have also been affected.

He says he doesn’t want to keep working at the kebab shop he ran with a business partner at the time of the attack and is now trying to sell his stake. He’s helped out at the shop a couple of times since the shooting but has found himself nervous around strangers, not wanting to explain.

“It’s just too crowded and too big,” he says. “People keep asking, ‘Oh, what’s happened to your arm?'”

Atacocugu says he’s thinking instead of turning back to his skills as a painter and decorator. It’s more peaceful, he says, working alongside a trusted crew with only a single customer to deal with at any one time. He’s also recently put in an offer to buy a new home in Christchurch, which he hopes will help him make a fresh start.

Atacocugu moved to the South Pacific country after meeting a New Zealand woman in Turkey and marrying her in 2001. They thought Christchurch would be a good place to raise their children, in an environment that seemed friendly and safe. The couple separated in 2016 and Atacocugu stayed in Christchurch to be near his two teenage sons.

He plans to attend the trial of the 29-year-old Australian white supremacist who is accused of carrying out last year’s massacre. Brenton Tarrant has pleaded not guilty to charges of terrorism, murder and attempted murder, and his trial is scheduled to start in June. If found guilty, he faces life imprisonment.

Atacocugu says the way that New Zealand Prime Minister Jacinda Ardern and people throughout the country came together in unity after the shooting shows the gunman has already failed in his quest to sow division. Hate, he says, has lost and love has won.

“As a human, yes, I’m so angry,” Atacocugu says. “But also, deep of my heart, my religion makes me calm down and be patient. So I know the New Zealand law system is going to punish this man, this terrorist, as much, as high as can be possible, under the law.”

Over the past year, Atacocugu has found moments of peace during two overseas trips. One was to Turkey, where he spent time with his mother and other family members and friends. The other was a trip to Saudi Arabia for the hajj, the annual pilgrimage that most Muslims are required to perform during their lifetime. Atacocugu was among 200 survivors and relatives from the Christchurch attacks who traveled to Saudi Arabia as guests of King Salman.

“Pretty much my whole life is upside down and changed,” Atacocugu says. “But spiritually, in a religious way, I’m much stronger than I used to be.”

That newfound strength has filtered through into other aspects of his life. Atacocugu recalls watching the “Jaws” movies when he was a boy, an experience that for months left him terrified of swimming.

Years later, he drew up a list of new things to experience during his life, including diving with sharks. Still, he could never quite get over that childhood fear.

But he says that after he was shot, he began to think about it a lot.

A couple of months ago, he drove to the southern end of New Zealand and, on a picture-perfect day, went on a tour boat and was submerged in a protective metal cage among great white sharks that swam within a body length of him. The experience left him exhilarated.