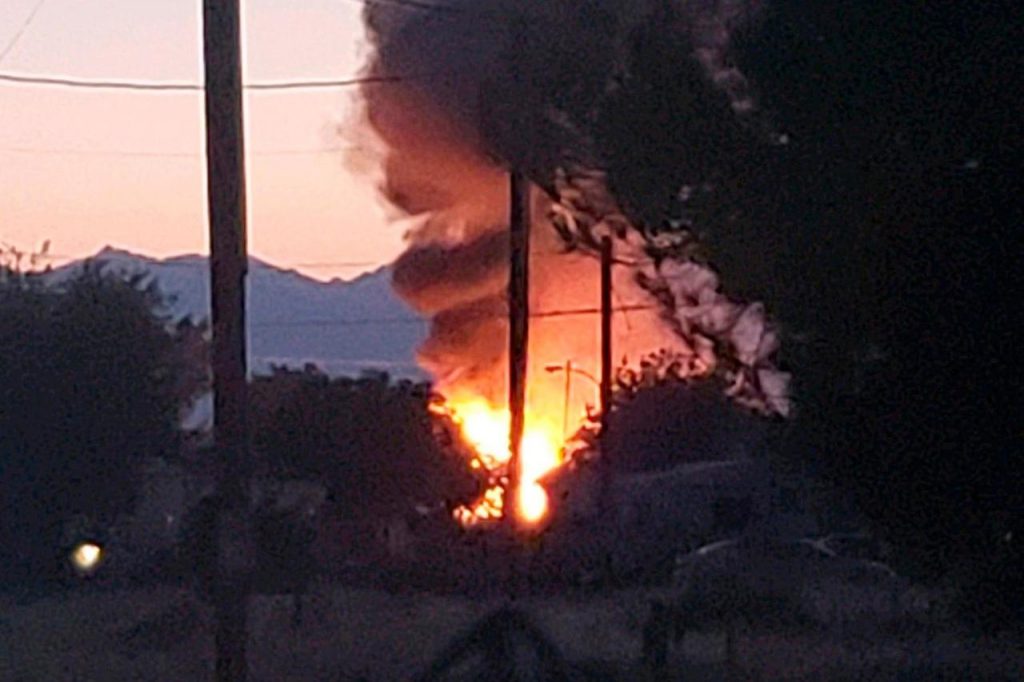 Los Angeles, Jul 6 (AP/UNB) — Small communities in the Mojave Desert are reeling from a magnitude 7.1 earthquake — the second major temblor in as many days to rock Southern California.

Authorities say Friday night’s shaker was centered near the town of Ridgecrest — the same area where a 6.4-magnitude quake hit on Independence Day.

Mark Ghillarducci, director of the California Office of Emergency Services, says there are “significant reports of structure fires, mostly as a result of gas leaks or gas line breaks throughout the city.”

He also says there’s a report of a building collapse in tiny Trona. He says there could be even more serious damage to the region that won’t be known until first light on Saturday.

The quake at 8:19 p.m. was felt as far north as Sacramento and even in Las Vegas. It’s been followed by a series of sizeable aftershocks.

However, authorities say there are no deaths or major building damage reported from the quake, which struck at 8:19 p.m. Friday.

It was centered about 150 miles from Los Angeles in the Mojave Desert near the town of Ridgecrest, which was still recovering from a 6.4-magnitude preshock that hit the region on Thursday.

There were reports of trailers burning at a mobile home, and State Route 178 in Kern County was closed by a rockslide and roadway damage.

But Kern County Fire Chief David Witt says it appears no buildings collapsed. He also says there have been a lot of ambulance calls but no reported fatalities.

An earthquake rattled Dodger Stadium in the fourth inning of the team’s game against the San Diego Padres.

The quake on Friday night happened when Dodgers second baseman Enriquè Hernàndez was batting. It didn’t appear to affect him or Padres pitcher Eric Lauer.

However, it was obvious to viewers of the SportsNet LA broadcast when the TV picture bounced up and down.

The quake registered an initial magnitude of 6.9 to 7.1, according to the U.S. Geological Survey.

There was no announcement by the stadium’s public address announcer.

Some fans in the upper deck appeared to leave their seats and move to a concourse at the top of the stadium.

The press box lurched for about 20 seconds.

The quake occurred a day after a magnitude 6.4 quake hit in the Mojave Desert about 150 miles from Los Angeles.

Authorities are now reporting injuries and damage from a big earthquake that was felt throughout Southern California and into Las Vegas and even Mexico.

The quake that hit at 8:19 p.m. was given a preliminary magnitude of 6.9 to 7.1, but the measurements were being calculated.

It followed Thursday’s 6.4-mangitude quake that at the time was the largest Southern California quake in 20 years. Both were centered near Ridgecrest in the Mojave Desert.

An earthquake with a preliminary magnitude of 6.9 has jolted Southern California, but there are no immediate reports of damage or injuries.

The U.S. Geological Survey says the quake hit at 8:19 p.m. Friday and was centered 11 miles from Ridgecrest, where a magnitude 6.4 quake struck on Thursday. The agency initially said the earthquake had a magnitude of 7.1.

The quake was felt downtown as a rolling motion that seemed to last at least a half-minute. It was felt as far away as Las Vegas, and the USGS says it also was felt in Mexico.

If the preliminary magnitude is correct, it would be the largest Southern California quake in 20 years.

Seismologists say there have been 1,700 aftershocks in the wake of the strongest earthquake to hit Southern California in 20 years but the chances of another large temblor are diminishing.

A magnitude 5.4 quake at 4:07 a.m. Friday is so far the strongest aftershock of Thursday’s 6.4 quake, which struck in the Mojave Desert near the town of Ridgecrest.

Zachary Ross of the California Institute of Technology says the number of aftershocks might be slightly higher than average. He also says a quake of that size could continue producing aftershocks for years.

The quake caused some damage to buildings and roads in and around Ridgecrest.

However, seismologists say it’s unlikely the quake will affect any fault lines away from the immediate area, such as the mighty San Andreas.

The city of Los Angeles is planning to reduce the threshold for public notifications by its earthquake early warning app, but officials say it was in the works before Southern California’s big earthquake Thursday.

The ShakeAlert LA app was designed to notify users of magnitudes of 5.0 or greater and when a separate intensity scale predicts potentially damaging shaking.

Robert de Groot of the U.S. Geological Survey says lowering the magnitude to 4.5 was already being worked on and had been discussed with LA as recently as a day before Thursday’s magnitude 6.4 quake centered in the Mojave Desert.

The shaking intensity levels predicted for LA were below damaging levels, so an alert was not triggered.

Mayor’s office spokeswoman Andrea Garcia also says the lower magnitude threshold has been in the planning stages and an update to the system is expected this month.

A vigorous aftershock sequence is following the strongest earthquake to hit Southern California in 20 years.

A magnitude 5.4 quake at 4:07 a.m. Friday is so far the strongest aftershock of Thursday’s magnitude 6.4 jolt, and was felt widely.

Seismologists had said there was an 80% probability of an aftershock of that strength.

Thursday’s big quake struck in the Mojave Desert, about 150 miles (240 kilometers) northeast of Los Angeles, near the town of Ridgecrest, which suffered damage to buildings and roads.

The strongest earthquake in 20 years shook a large swath of Southern California and parts of Nevada on the July 4th holiday, rattling nerves and causing injuries and damage in a town near the epicenter, followed by a swarm of ongoing aftershocks.

The 6.4 magnitude quake struck at 10:33 a.m. Thursday in the Mojave Desert, about 150 miles (240 kilometers) northeast of Los Angeles, near the town of Ridgecrest, California.

Witt says 15 patients were evacuated from the Ridgecrest Regional Hospital as a precaution and out of concern for aftershocks.