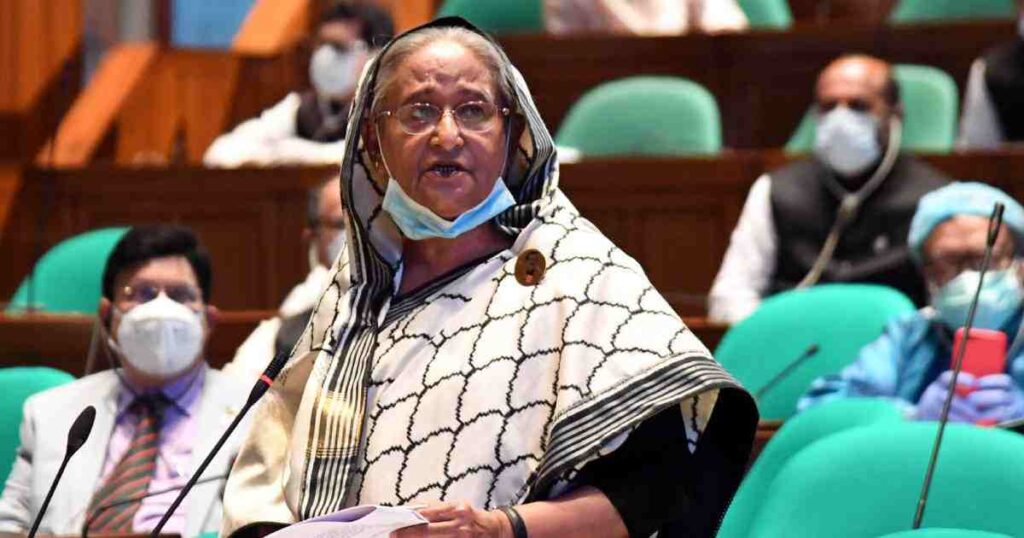 Prime Minister Sheikh Hasina on Saturday said the government has taken measures to ensure food security for the people of the country considering the possible impacts of the coronavirus pandemic.“We’ve taken various measures to ensure food security for the people of the country,” she told Parliament participating in discussions on the condolence motion over the death of sitting MP and former land minister Shamsur Rahman Sherif.
“We’ve no scarcity of food and won’t have either. But we should continue our agricultural production,” she said adding that the government will provide farmers loans at 4 percent interest to continue production.
Sheikh Hasina said the government has taken plans and steps to keep the country’s economy moving and vibrant in the next three years so that the people of Bangladesh will never suffer in the case of worldwide famine triggered by coronavirus pandemic.
“If we can harvest the paddy properly (this season), we won’t have any food problem,” Hasina said, adding that now there is an opportunity for day-labourers to earn money from paddy harvesting.
The Prime Minister said the government will use the money of some development projects for the welfare of people.
“We’ve many development projects which don’t need to be completed now. We can save the money to use that for the welfare of people,” she said.
Voicing displeasure as many people are not following the health guidelines and maintaining social distancing, the Prime Minister said, “Actually, the people of our country have become a bit braver. We repeatedly requested all to stay in their present locations. Many don’t want to follow that. I don’t know why. We requested all to stay home. Many even travelled to Borguna from Narayanganj defying government instructions.
The Prime Minister urged all, particularly MPs and other elected representatives, to follow and help others follow the regular health guidelines to check the coronavirus spread.
She said the government is increasing the number of ration cards to one crore from the existing 50 lakh to brining some five crore people under the facility of purchasing of rice at a subsidized rate of Tk 10 per kg.
“Now there are 50 lakh ration cards given to the poor people (across the country). We’ve already asked for preparing another 50 lakh ration cards…. so, there’ll be one crore ration card. Some five crore people will enjoy this facility if each family have 4-5 members,” Hasina said.
The PM said she has directed the Disaster Management and Relief Ministry to engage its staff with its hotline for round the clock and provide food assistance immediately after a needy person seeks help through the hotline.
She said the government has so far distributed Tk 50 crore cash and 90,000 metric tons of food in 64 districts to ease the sufferings of the poor people.
Hasina said the government has announced incentives for cottage, small and heavy industries, RMG and farmers to keep the economy moving to overcome the pandemic fallout.
Mentioning that storms and disasters may happen, the Prime Minister said there is nothing to be upset and worried. “It’ll have to be faced with fortitude…face the ongoing disaster from your respective positions.
About Shamsur Rahman, the Prime Minister said he actively participated in every movement and struggle including the Language Movement and the Liberation War.
Noting that he stood beside the people in any disaster, she said his demise is a loss for the people of the country and also the country.”
Sheikh Hasina, also President of Bangladesh Awami League, said Shamsur Rahman is one of those who always stood beside her and supported her. “He was a strong pillar for our organisation.”
Sheikh Hasina expressed deep shock at his death and conveyed profound sympathy to the bereaved family members.
Earlier, Speaker Dr Shirin Sharmin Chaudhury moved the condolence motion in the House at the beginning of the day’s business.
AL senior parliamentarians Shajahan Khan, Matia Chowdhury and Mohammad Nasim, Opposition chief whip Mashiur Rahman Ranga also joined the discussion in the briefest session in Bangladesh history, lasting 85 minutes.
On April 2, Shamsur Rahman Sherif, also President of Pabna district unit of Awami League, passed away at a hospital in Dhaka. – UNB