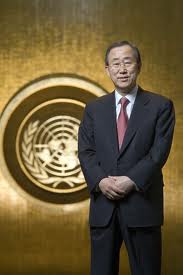 UN Secretary-General Ban Ki-moon has urged the political and religious leaders in Bangladesh to engage in constructive dialogue and help defuse tensions.The Secretary-General, in a statement on Tuesday, called upon all concerned to stop violence, respect the law and express their views peacefully.
The UN chief has been following the recent wave of violence in Bangladesh with increasing concern and is saddened by the loss of lives, including the ones during the events that unfolded in Dhaka throughout Sunday and into Monday, said the statement.
Quoting media reports, the statement said more than 30 people have died and 60 injured in clashes between police and protesters in capital Dhaka. The clashes come just over a week after a garment factory building collapsed on the outskirts of Dhaka, killing over 650 people, it said.
The UN chief is sending Assistant Secretary-General for Political Affairs, Oscar Fernández-Taranco to discuss with political parties and the Election Commission to hold free, fair and credible elections.
Fernández-Taranco will arrive here on May 10 and to hold discussions with the stakeholders during his three-day visit.
Diplomats in Dhaka have continuously been expressing concern over the deteriorating political situation and calling for dialogue to resolve problems.
On Monday, US Ambassador to Bangladesh Dan Mozena reiterated his call for the political leaders to reach out to each other to engage in dialogue to resolve the ongoing crisis.
“Violence simply isn’t acceptable,” the envoy told reporters while making comments on the ongoing violence.
Mozena said Bangladesh is a democratic country and democratic processes do not allow violence. “Everyone has a right to express his views but you
don’t have a right to commit violent acts.” UNB