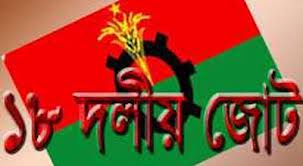 The BNP-led 18-party alliance is going to enforce countrywide daylong shutdowns on Wednesday and Thursday protesting the killing of unarmed Alems (Islamic scholars) in a crackdown on Hefajat-e-Islami’s sit-in at Shapla Chattar early Monday.BNP Standing Committee member Dr Khandker Mosharraf Hossain announced the hartal programme later on Monday night after a meeting of the 18-party alliance held with Begum Khaleda Zia in the chair at her Gulshan office.
He said the hartal will be observed from 6am to 6pm on Wednesday and during the same period on Thursday as the night will remain out of the purview of the lockdown.
Besides, Hefajat-e Islam Bangladesh called a countrywide daylong shutdown for Sunday protesting the crackdown on its leaders and activists at Shapla Chattar.
Meanwhile, panic gripped the city dwellers as at least four vehicles were torched at different parts of the capital and four crude bombs exploded in front of Brac University at Mohakhali on the eve of the hartal. However, there was no report of any casualty in the incidents.
Meanwhile, huge police and Rab and BGB members started guarding the city streets in the evening to maintain law and order.
Sources at the Dhaka Metropolitan Police said additional 10,000 police will be on duty in the city during the hartal hours on Wednesday and Thursday to avert any untoward incident and ensure the security of people and their property.
Besides, plainclothes police with still and video cameras will be put on alert at a number of strategic points in the city during the hartal hours to identify the troublemakers.
Members of Rapid Action Battalion (Rab) will also be posted at a number of places along with the police in uniform.
Meanwhile, the leaders and activists and the ruling Awami League and its associate bodies will be there on the streets to foil the hartal. Party sources said the leaders and activists of the ruling party will take position at different points at every ward in the city and will also assist police in maintaining the law and order.
Earlier on Monday, the opposition termed the predawn crackdown by law enforcers on Hefajat-e-Islam activists at Shapla Chattar a planned disastrous killing, and claimed that over a thousand people were killed while hundreds of bodies concealed during the drive. “This was the repetition of the March 25 black night of 1971 which surpassed the deadly crimes against humanity committed during the war of independence,” said BNP standing committee member MK Anwar.
Anwar alleged that police, Rab and BGB men along with ruling party cadres attacked the peaceful sit-in programme of the Hefajat men creating a spooky situation by snapping power connection, and killed and injured several thousands hapless devoted Alem and Ulema in indiscriminate firings. UNB