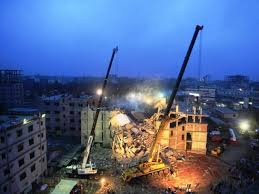 The death toll in the disastrous Rana Plaza collapse reached 735 with the recovery of 45 more bodies on Tuesday.Rescue workers retrieved the 45 bodies from the ruins of the collapsed building from 6am to 7pm Tuesday, said sources at the Army control room set up at Mansur Market in Savar Bus Stand area.
Of the recovered corpses, 560 were handed over to the families while 52 have been kept on the Savar Adhar Chandra Model High School ground while the rest at the morgues of Dhaka Medical College Hospital and Mitford Hospital and Jurain Graveyard, he said.
A total of 2,437 people have been rescued alive so far from the rubble of the building. Of them, nine succumbed to their injuries at different hospitals.
The second phase of the rescue operation by using heavy equipment continued for the eighth successive day Tuesday.
Members of the Army, Navy, Air Force, Fire Service and Red Crescent Society are carrying out the 2nd phase rescue operation that began on April 30. Rescuers hoped to complete the rescue operation soon. However, they said the rescue operation will continue until all the bodies are pulled out of the debris.
The eight-storey building crashed on April 24.
Meanwhile, affected workers of five garment factories housed at the Rana
Plaza blocked Dhaka-Aricha highway on Tuesday demanding that their arrears by paid immediately.
Besides, 180 traders of Rana Plaza formed a human chain in front of Mansur Market around noon demanding proper compensation for their losses.
On the other hand, two cases were filed against Sohel Rana in connection with Monday’s recovery of a pistol, five bullets and 51 bottles of Phensidyl syrup from a brick-kiln owned him at Dhamrai. UNB