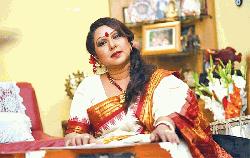 Subhra Debnath -an acclaimed Tagore singer is going to perform an evening of Tagore songs on Friday at 6.30 pm at the Nouvelle Vague Auditorium, Alliance Franaise de Dhaka (AFD) in the city.
Since her childhood, Subhra Debnath has been on a musical journey, starting with lessons from the distinguished artist Dilip Das and later from the likes of Murad Ali, Lili Islam, Sadi Mohammad and Rezwana Choudhury Bannya. She released two studio albums till date.
In 2016, she has released one studio album (“Dujone Dujonar”). In 2017, she has released another album (Shukhero Sondhyane). She is continuously performing in different stages of the country.
Talking about her work, Subhra said, “Despite the fact that most of the audio companies do not treat Rabindra Sangeet albums in the same way they treat other pop albums, I was confident that the trend of Rabindra Sangeet will see a rise.”
A teacher by profession, Debnath regularly performs in local and international shows. She has received awards and accolades from Egypt, Nepal and Turkey and other countries. She is doing her job in the Department of Philosophy in Adarsha Degree College and University, Srinagar-Kharra-Churain, Munsiganj. Besides doing this, she is also teaching in a music school. She has also performed outside of the country. She has received numerous awards and accolades from Egypt, Nepal and Turkey among others. A pure singer of Rabindra Sangeet, Shubra refined her voice so that through her years of struggles and dedication.