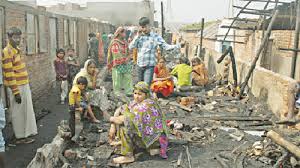 A total of 1.35 lakh dwellers of 70 slums in the city are leading subhuman life for various reasons, including squalid housing and lack of access to education.Most of the residents are leading life riddled with problems in various ways, very few of them being owners of the shanties of the slums.
Urban Partnerships for Poverty Reduction Project (UPPRP) sources said most of the slum dwellers are rickshaw pullers, push cart drivers, hawkers, vendors, maid servants and beggars.
UPPRP is working for development of dwellers of 59 slums of the old municipality area under Comilla City Corporation.
Some 17,000 families are living in these slums. Besides, there are 12 slums in the city which house 50,000 people. According to a survey, these slums remain overcrowded as the rooms
there are available at low rent. This overcrowding causes various health problems to the inmates.
The slum dwellers have to lead life there amid so many acute problems, including toilet crisis, lack of safe drinking water and water logging
caused by improper drainage system. Most of their children do not get the chance to go to school.
Many of them are involved in child work. The slums are called safe havens for drug traders and drug addicts who are involved in various anti-social activities and crimes including mugging.
Mariam Begum, a dweller of Chandpur slum, said it is very difficult for them to send their children to school as they live from hand to mouth.
Former convener of Sachetan Nagarik Committee Badrul Huda Jenu said there is not any visible plan for the development of the slum dwellers.
But particular attention should be given to some matters, especially sanitation problem, pure drinking water and health services, he added.
Mohammad Hanif Milon, town manager of UPPRP, said UPPRP had taken several programmes for development of the life style of slum dwellers.
The organisation has so far built 1,455 latrines, 446 tube -wells, 6,442 meter footpaths, 1810 metre drains and 582 metres slabs.
Besides, the UPPRP has provided grants for education of the old people, treatment of teenagers and on business purpose.
Sadar upazila health officer Dr Golam Shahjahan said if the sanitation and safe drinking water problems are solved, the slum dwellers can be kept free from several diseases.
(UNB, Comilla)