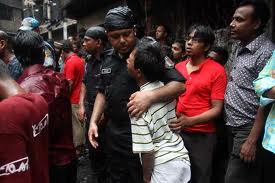 A girl filed a case against a Rab personnel with sadar thana of the district on Thursday for seducing her.The accused, M Shamim, is an employee of the economic department of the Rapid Action Battalion (Rab) headquarters and son of Abdur Razzak, resident of Gupirpara village of the upazila.
A soldier of Bangladesh Army, Shamim had been working in the elite force on deputation.
According to the case statement, Shamim and the victim, who are relatives of one another, had a romantic relationship for a long time. Shamim persuaded her (the girl) into having sex with him at a house in
the district town on May 21 with a promise to marry her but since then he had disconnected all types of communication with her.
Later the victim lodged the case with the thana against him. In this regard, Manikul Islam, sub-inspector of Sirajganj Police Station and investigator of the case, said medical test of the girl
was completed at Sirajganj Sadar Hospital on Friday noon.Necessary steps would be taken against the accused, added Manikul.
(UNB, Siranjganj)