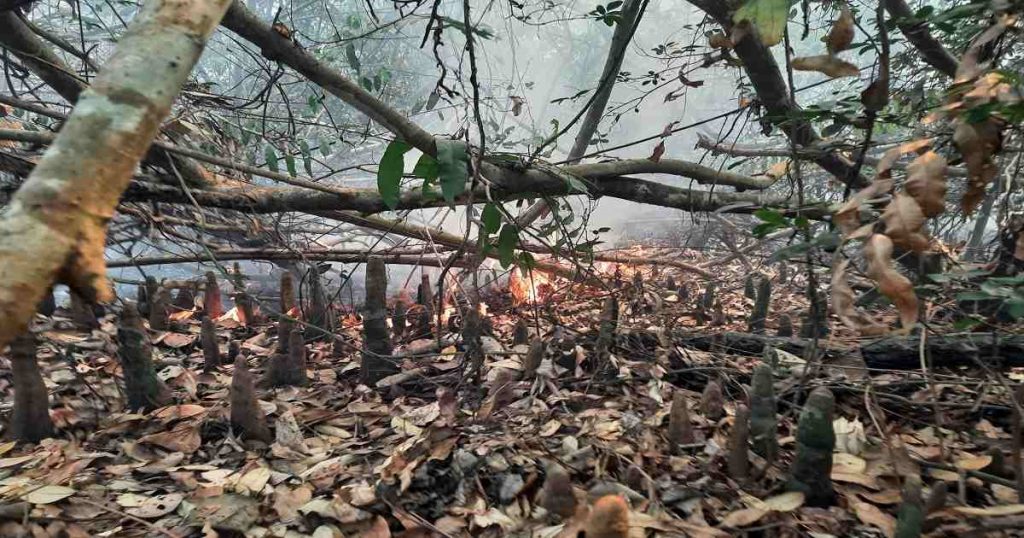 Bagerhat, May 3 : A fierce fire broke out at Daser Bharani under Sharankhola Range of the Sundarbans East Forest Division on Monday morning.Abdul Mannan, Sharankhola Station Officer (East Sundarbans), said the fire could not be put out till filing of the report around 6:15 pm.
Two units of Sharankhola Fire Service and Civil Defence Station as well as the forest department are working together to bring the fire under control.
Mannan said his team along with 25-30 forest rangers reached the spot around 11 am and tried to bring the flames under control. Later, they were joined by two units of fire service.
According to Sharankhola Fire Service Station Officer-in-Charge Abdul Chattar, “The fire service team struggled to make any progress for lack of water. So, we decided to build a 2-km pipeline connecting the site of fire and Bhola river.
He, however, said the pipe installation work could not be completed yet.
Confirming the fire incident, Mohammad Belayet Hossain, divisional forest officer (DFO) of the Sundarbans East Forest Department, said: “We started cutting fire canals around the site to stop the fire from spreading. We’re hopeful that we’ll be able to put out the fire very soon.”
The DFO also added that a three-member committee will be formed to investigate what actually caused the fire. “They’ll have to submit their report within seven working days. ”
According to locals, the fire has already spread to a large area of the forest and it will not be possible to control it very easily as there is no water nearby.
They have alleged that some unscrupulous people often enter the forest illegally to collect honey. They collect honey from beehives by setting fire.
On February 8 this year, a fire at Dhansagar station under Chandpai range of the Sundarbans East Division had burnt down at least four decimals of forestland, reports UNB.