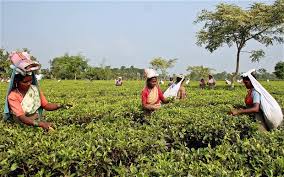 Tea labours in two tea gardens observed strike for about eight hours
yesterday to protest the murder of one people in Sindurkhan and
Razghat Tea Estate in Srimangal Upazila of the district.In this connection police arrested 22 people. The deceased was Ovimon
Bunerji, 46, son of Pobol Bunerji, a resident of village Sindurkhan
Tea estate of Srimangal upazila.
He was a Tea labour of this tes garden, police said.  Police arrested
22 peoples in this connection.
Witnesses said, Police recovered the body of a ‘missing’ man from in
front of sections 10 in this tea garden.
Police said, locals found the body Friday around 9pm and then informed
them. The body has been sent to Moulvibazar sadar Hospital for the
postmortem. Srimangal police station Sub-inspector Md. Humaun Ahmed
said, Ovimon went missing on Thursday around 3pm.
He said, victim’s family has filed a case. Tea labourers at the
Sindurkhan Tea Estate and Uttar Rajghat Tea Garden protested the
murder.
The office-in-charge, Srimangal Police Station, Mohammed Abdullah
confirmed the news to journalists, On information, local Rajghat Union
Chairman Bijoy Bunerji reached the spot and persuaded the protesters
to withdraw the strike.
(Our Corespondent)