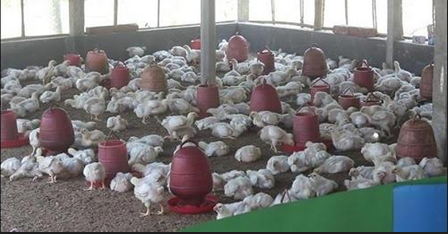 Supply chain disruption and lack of effective measures by authorities concerned during the coronavirus pandemic have led to the closure of dozens of poultry farms in Thakurgaon.Besides, restriction on movement also dealt a heavy blow to the farms as they failed to supply their chicken to other districts.
Thousands of people in Thakurgaon are dependent on poultry business.
This year has been tough for almost all businesses, including poultry farms, after the coronavirus outbreak and subsequent government-announced general holidays since March 26 to curb the spread of the virus.
Besides, people have started avoiding consumption of chicken during the pandemic resulting in a slump in prices.
In this situation, the traders have sold boiler chicken at Tk 55-60 per kg, Pakistani chicken Tk 100 per kg, local variety of chicken at Tk 280 per kg. Besides, four pieces of eggs is being sold at Tk 20.
Continuous losses have forced many to shut down their farms.
Poultry farmers Joynal Ali, Shafiqul Islam, Kismat Ali of Gareya, Chilrang, and Salandor areas of the Sadar upazila said they have been running their businesses taking loans.
Besides, they have to bear additional costs including the wages of workers but as the prices of chicken and egg come down, it is impossible for them to continue operating businesses.
As a result, many farmers have closed down their business and are now staring at bleak future prospects.
According to sources at District Livestock office, there are 7,000 poultry farms in the district who produce 4 million chicken and 180 million eggs a year.
Mohammad Altaf Hossain, District Livestock official, said they were yet to assess the losses.
“We have no idea about how many poultry farms have closed down during the coronavirus situation,” he said, reports UNB from Thakurgaon.