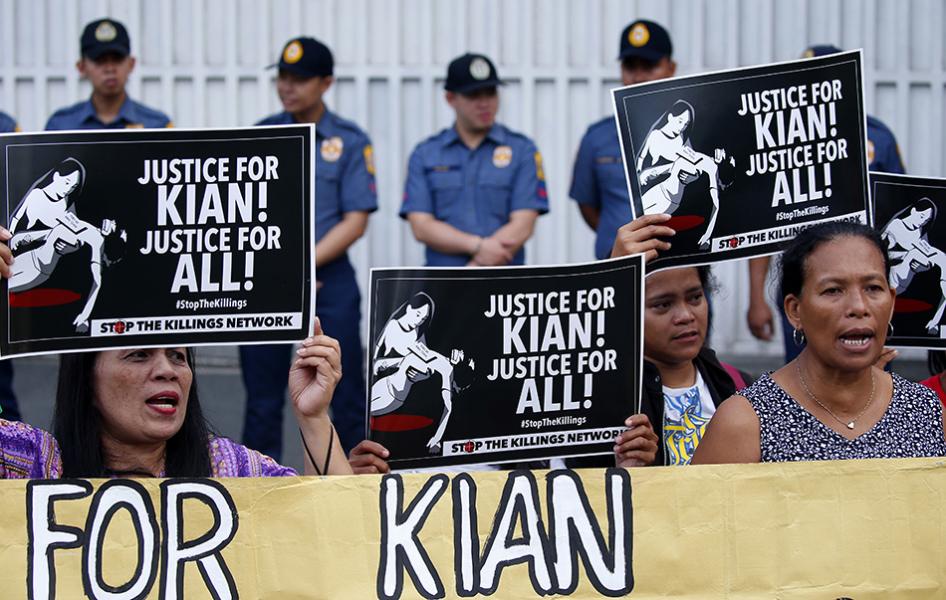 UN Human Rights Council Should Adopt Resolution to Stop Carnage
On Sunday, a 3-year-old girl became the latest casualty of Philippine President Rodrigo Duterte’s “war on drugs,” which has killed thousands over the past three years. Myka died after being shot during a police raid targeting her father, Renato Dolofrina, in Rizal province, near Manila, media reports said. Police claimed that Dolofrina used the child as a “shield” during the operation.
Police accounts of drug raids are not reliable because the officers enforcing the “drug war” have been shown to manufacture evidence such as planting weapons and drugs to justify killings. Deceit has become the hallmark of this brutal campaign in which the authorities admit 6,600 people have been killed – other estimates suggest as many as 27,000 – because all of them, according to authorities, fought back, ignoring case after case in which witnesses say suspects were executed.
Most of those killed in Duterte’s anti-drug campaign, including the children like Myka, lived in impoverished urban areas. The United Nations children’s agency, UNICEF, was among those that condemned the July 2018 death of Skyler Abatayo, 4, and that of Danica May Garcia, 5, in August 2016.
Then there are the children who themselves were targeted and killed, the most notorious case that of 17-year-old Kian Santos, who was shown in surveillance footage being dragged away by police and was later found dead in a pigsty. Kian’s murder resulted in the only conviction so far of police officers implicated in a “drug war” killing. Child rights groups in the Philippines have told Human Rights Watch that more than 100 children have died since the campaign began in June 2016.
The “drug war” has also damaged countless Filipino children who continue to grapple with the psychological, emotional, social, and economic impact of the killings of their loved ones, who were often their family’s breadwinner. A web feature Human Rights Watch published last week underscored the devastation this campaign has unleashed on children.
The deaths of Myka and other children, as well as the thousands of adults, should prod the UN Human Rights Council to adopt the Iceland-initiated resolution that urges the Office of the High Commissioner for Human Rights to report on the “drug war” killings and other human rights violations in the Philippines. The resolution on the table is a modest first step, but if passed and implemented it can make significant inroads towards stopping the carnage in the Philippines. – Human Rights Watch