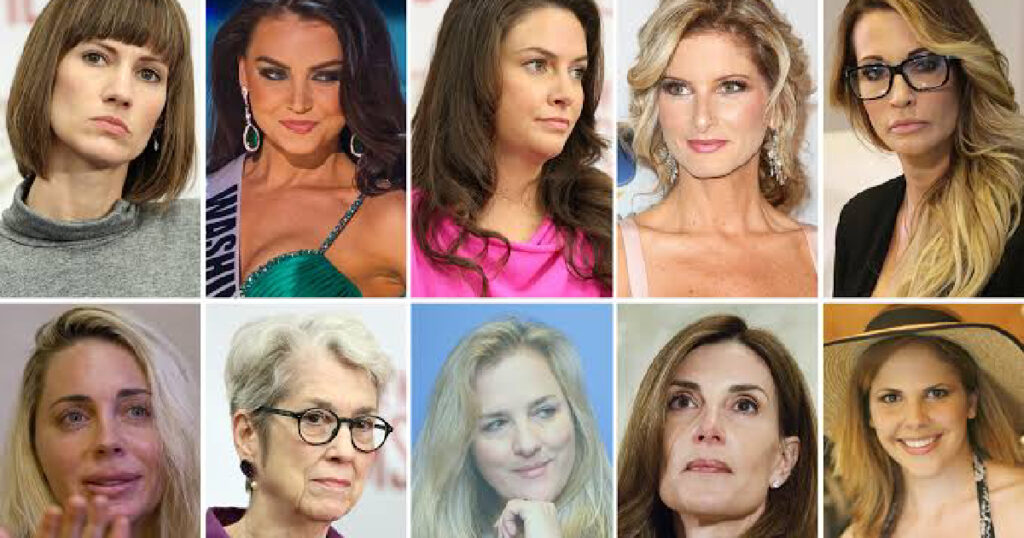 From the White House, President Donald Trump has fought several lawsuits from women who say they had sexual interactions with him before he took office. The latest case was filed just this week.

Trump denies the women’s claims of both unwanted and consensual encounters, sometimes followed by what the women call defamatory statements about them. Judges have thrown some cases out but let others proceed.

A look at the lawsuits:

The latest lawsuit comes from E. Jean Carroll, an advice columnist who filed a defamation case against Trump on Monday in New York City.

Carroll alleges Trump raped her in a luxury department store dressing room in the mid-1990s after they ran into each other and bantered about lingerie he was thinking of buying for someone else. She first told her story publicly in June, in a magazine piece ahead of a book release.

In response, Trump said in a series of statements and interviews that she was “totally lying” to get publicity for her book.

He said they’d never met, though a 1987 photo shows the two with their then-spouses at a social event. Trump brushed off the photo as a moment when he was “standing with my coat on in a line — give me a break.”

Carroll’s lawsuit says Trump’s statements were false and cost the longtime Elle magazine columnist the goodwill of many readers. From July through September, she got about half as many letters — her column’s lifeblood — as she did during the same months in 2018, the suit says.

There’s been no response yet from Trump or from attorneys who have represented him in a similar case.

Summer Zervos once hoped to become Trump’s reality TV “apprentice.” She’s now his accuser in a defamation suit that claims he sexually assaulted her, then slurred her by calling her a liar.

Zervos, a California restaurateur, was on “The Apprentice” in 2006. She says Trump subjected her to unwanted kissing and groping the following year when she sought career advice.

She was among more than a dozen women who went public during Trump’s presidential campaign with sexual assault and harassment allegations.

Trump called the women “liars” spouting “totally made up nonsense to steal the election.” He also issued a statement denying Zervos’ allegations and retweeted another person’s criticism of the “hoax.”

She sued in New York City in 2017, saying his words led to threats against her and her restaurant.

Trump lawyer Marc Kasowitz has said that the president’s statements were true and protected by free speech rights and that Zervos’ claims are meritless. Trump’s attorneys have tried to get the case thrown out or delayed until after his presidency. Courts so far have said no.

A trial date hasn’t been scheduled. The two sides have been exchanging documents, including cellphone and calendar records that Zervos’ lawyer, Marian Wang, says corroborate some details of Zervos’ account.

The Associated Press reported Monday that Trump’s cellphone records show a call to Zervos on Dec. 21, 2007, when she says he called to invite her to dinner and then assaulted her at the Beverly Hills Hotel in California.

Kasowitz’ firm said in a statement Tuesday that the call record “in no way corroborates Ms. Zervos’s allegations” and that Zervos “was pestering Mr. Trump for a job.”

Along the way, Daniels filed a defamation suit over the president’s response to her allegation that she was threatened to keep quiet about a purported 2006 tryst. Trump denies any sexual encounter.

During a 2018 TV appearance, Daniels released a composite sketch of an unidentified man, saying he approached her in a Las Vegas parking lot in 2011 and warned her to stay silent.

Trump tweeted that the sketch was “a total con job.” Daniels’ suit said the remark was false and disparaging.

A federal judge in Los Angeles threw out the case in October 2018, saying the nation’s political discourse would be harmed if “any strongly worded response by a president to another politician or public figure could constitute an action for defamation.”

The judge later ordered Daniels to pay Trump over $290,000 in attorneys’ fees and sanctions.

Daniels — legally, Stephanie Clifford — is appealing the dismissal of the case.

Alva Johnson was working for Trump’s campaign in Florida when, according to her, he planted an unwanted kiss on her face during an August 2016 meet-and-greet with volunteers and supporters.

Johnson filed a federal lawsuit against the president in February, claiming battery and race- and gender-based pay discrimination; she is African American.

The White House and Trump’s campaign denied the claims. Trump’s lawyers said video proved the kiss was harmless. Johnson’s lawyers said it backed up her story.

A federal judge in Florida dismissed the case in June, calling it a “political lawsuit.”

Johnson decided not to revive it, telling media outlets she couldn’t keep fighting Trump’s resources and felt the judicial system wasn’t holding him accountable. Trump’s lawyers said he was vindicated.