The World Health Organization (WHO) in its 133rd Executive Board meeting held in Geneva last month accepted the Bangladesh resolution on autism.“In response to Bangladesh’s request, 50 countries jointly proposed to accept the resolution, Comprehensive and Coordination Efforts for the Management of Autism Spectrum Disorders (ASDs),” said Health and Family Welfare Minister Dr AFM Ruhal Haque.
He was addressing a press conference at the ministry.
The minister said leaders of the delegations from 40 countries, including the USA, France, Switzerland, Australia, Saudi Arabia, Canada, Malaysia and South Africa, delivered speeches at the meeting for accepting the Bangladesh resolution.
He said the resolution will finally be approved in the WHO conference to be held in May, 2014.  “Later, the implementation of different activities mentioned in the resolution will begin in all the member countries.”
Ruhal Haque said Prime Minister Sheikh Hasina’s daughter Saima Wazed Hossain proposed the autism resolution in the WHO assembly.
State Minister for Health Mojibar Rahman Fakir and secretary MM Niaz Uddin were, among others, present. (Source: UNB) 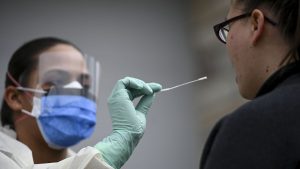