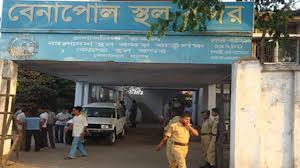 At least ten Bangladeshi people including two children returned home through Benapole check post on Friday after serving nine months in an Indian jail.Indian police handed them over to Benapole immigration police in the evening.The returnees were identified as Mira Khatun, 23, Rita Khatun, 25, Nasima Akter, 24, Parveen Akter, 26, Amina Khatun, 24, Abeda Khatun, 27, Tuli Akter, 26, Manjura Khatun, 28, Mahmuda Akter, 9 and Mahfuza Akter, 10.All of them hail from different parts of Jessore, Narail and Bagerhat districts.Aslam Khan, officer-in-charge of Benapole check-post immigration police, said Indian police arrested them in Hawra of West Bengal for doing job there illegally.Later they were sent to jail awarding them nine months’ imprisonment.Upon completion of the jail term, they were later kept in a shelter centre there.The Indian government has returned them following repeated requests of the Home Ministry of Bangladesh through sending letters several times. -UNB, Benapole