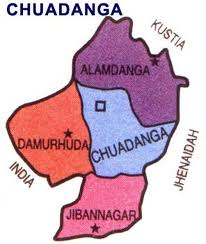 The implementation of 368 schemes under test relief programme in four upazilas of the district is nearing completion at a cost of 691 metric tons of rice.The four upazilas of the district are Chuadanga Sadar, Alamdanga, Damurhuda and Jibannagar.Official sources said of the total schemes, 131 schemes are being implemented in Chuadanga Sadar upazila, 101 schemes in Alamdanga upazila, 63 schemes in Damurhuda upazila and 73 schemes in Jibannagarupazila.So far about 70 percent works of the schemes have been implemented and the rest are expected to be completed by June next.The ongoing schemes include construction and re-construction of kaccha roads in rural areas, earth works on the premises of different educational institutions and graveyards and re-excavation of government ponds.
BSS, Chuadanga