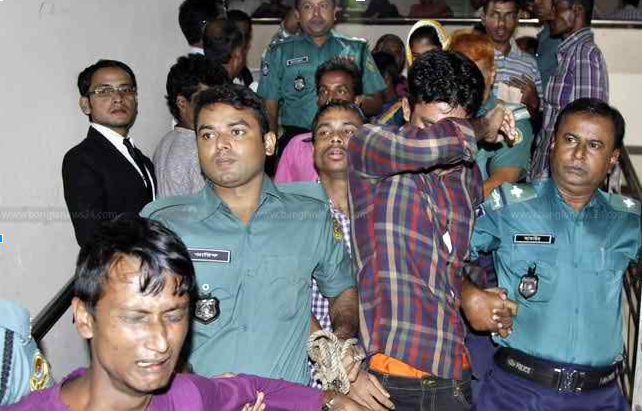 A court in Chittagong convicted four persons with death sentence for alleged involvement in killing of a child Yasin Arafat Abir . Another accused in the murder Rabiya Begum acquitted from the charge of killing . Judge of Divisional Speedy Trial Tribunal Mahitul Hoque Anam chowdhury announced this death penalty in the court yesterday. The convicts of capital punishment are- Auto-Richshaw driver Idrish Miah, Tempo Driver Faruk, and the members of killers gang Md. Sujan and Anowar.Among them Sujan is now absconding. Acquitted Rabey Begum is the wife of driver Idrish Miah, court sources said. Victim Abir was the son of Riazuddin and Rina Begum , who is the residents of Halishahar B-block area in city .Abir was the student of child class of Pranhari Amin Academy school. PP of the Tribunal advocate Ayub Khan told the media that Abir was abducted from his residence area in Halishahar on December 17 m 2012 by Tempo driver Faruk and brought in the autorickshaw driven by driver Md.Idrish . Later on way to Sitakunda, Abir was hacked to death and left away the body in Salimpur Kalu Shah Mazar area . Police on information, recovered the body from salimpur on next day, sources said. Following case filed before the Halishahar thana on December 18, 2012 , police managed to round up three accused from Pahartali , one from Chandgaon and another from Chandpur. Tribunal sources said the case transferred to Tribunal from trial court in February this year. Out of 28 witnesses, 21 give depositions before the tribunal.The convicts confessed their involvement in killing the child Abir. Under section 302 of BPC, 4 accused have been given death penalty ,sources said.