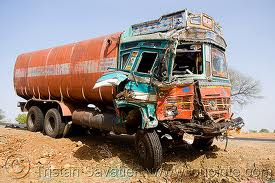 Six people, including a woman and her son, were killed and two others injured as a truck rammed into a human hauler at Kashinathpur on the Pabna-Nagarbari highway in Sujanagar upazila on Wednesday morning.
The deceased were identified as Runa,20, Ahasan,58, Rana,12, and his mother, and Abdul Matin,50 and Banya,8.
Witnesses said a speeding garlic-laden Dhaka-bound truck rammed a ‘Nosiman’ (human hauler) around 9:30am, leaving Runa, Ahasan and Rana, passengers of the human hauler, dead on the spot and five others injured.Of the five critically injured, three — Rana’s mother, Abdul Matin and Banya — died on the way to Pabna General Hospital.
Former chairman of Ahmmedpur union of the upazila Jalal Uddin confirmed the death of the six, saying all the deceased hailed from Charbotholia village of the same upazila.
They were on their way to Kashinathpur in the human hauler, Nasimon.
Officer-in-charge of Aminpur Police Station Jasim Uddin Sarkar, however, confirmed the death of only three people in the accident.
Police said they seized the truck but its driver and helper managed to flee the scene. – UNB