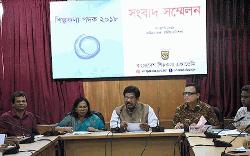 Culture desk
Bangladesh Shilpakala Academy yesterday announced the names of seven personalities for the ‘Shilpakala Padak 2018’ in seven categories.
The awardees are: Goura Gopal Halder in music, Sunil Chandra Das in instrumental music, Jayanta Chattapadhya in recitation, Shukla Sarker in dance, Alakesh Ghose in fine arts, Mina Barua in folk culture and M Hamid in dramatics.
Shilpakala Academy Director General Liakat Ali Lucky announced the names of the awardees at a press conference held at the academy at Shegunbagicha in the city.
Each awardee will get a cheque of Taka one lakh, a certificate and a crest, he said.
President Abdul Hamid will formally hand over the award to the recipients at a function on July 18.
Additional Secretary of the Cultural Affairs Ministry Roksana Malek and Secretary of the academy Badrul Alam Bhiuyan were present at the press conference among others.
The Shilpakala Academy has been conferring the ‘Shilpakala Padak’ since 2013 under the initiative of Cultural Affairs Ministry.