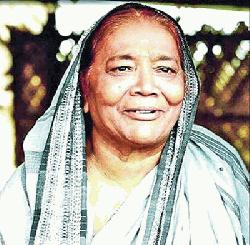 Actress Maya Ghosh passed away at 8.45am yesterday at Jessore Queens Hospital, Jessore. She was suffering from cancer. She was aged 70 and has left three children behind. Her song Deepak Ghosh claims that she was also a Freedom Fighter and used to cook for Freedom Fighters in the Kolkata refugee camp during the Liberation War and also took part in the war. But she did not have any certification and even did not care to have one. Maya Ghosh acted in more than two hundred cinemas acting as mother to actors like Alamgir, Jashim, Zafar Iqbal, Ilias Kanchan and more during the 80s and the 90s.
Maya Ghosh was first diagnosed with cancer in 2000. The next year she started receiving treatment at Kolkata’s Soroj Gupta Cancer Hospital. Her health improved in 2009. But she again became ill last October. Thus she was admitted to the same Kolkata hospital again in January and then after a break again in March. As her conditions were not improving and she herself wanted to return to the country, her sons brought her back in April 15. As her conditions deteriorated recently she was admitted to Jessore Queens Hospital, where she breathed her last. She was also suffering from heart and eye complications at the time of her death.
Maya Ghosh first appeared in the film Patal Bijoy in 1981. She has also acted in stage and TV dramas. She was born in 1949 in Manirampur, Jessore. Shilpi Oikyajote president DA Tayeb and general secretary GM Saikat were contacting with the film for her treatment. The organisation provided with twenty thousand for the funeral rites of the actress in Jessore.