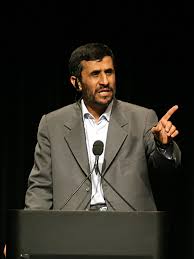 Iran’s constitutional watchdog said it will seek possible charges against president Mahmoud Ahmadinejad for allegedly violating rules by accompanying his chief adviser to the election registry office the previous day.A conviction could bring a maximum punishment of six months in jail or 74 lashes, reports Geo TV.
The dispute appears to stem from an ongoing confrontation between Ahmadinejad and the ruling clerics in Iran following years of tensions over power struggles.
It could also herald potential difficulties for Ahmadinejad’s protégé, Esfandiar Rahim Mashaei, to be cleared for the June 14 presidential election, which is to pick Ahmadinejad’s successor.
The president himself is not running since Iran’s constitution bars him from seeking a third term in office.
The group that complained on Sunday, the Guardian Council, also vets all candidates for the presidency.
Mashaei is among more than 680 hopefuls, but no more than a handful will be selected for the final ballot.
State TV quoted Guardian Council spokesman Abbas Ali Kadkhodaei as saying the claims against Ahmadinejad will be referred to the country’s judiciary for possible charges.
The Council’s members said that public fund rules were broken when Ahmadinejad accompanied Mashaei to the election registration office on Saturday, said Kadkhodaei. banglanews24.com