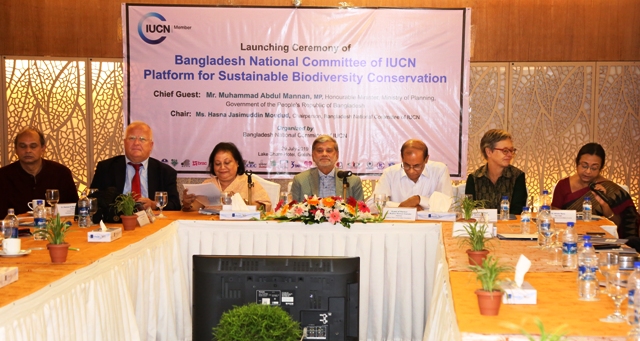 Dhaka, July 29 – The need for coordination of biodiversity conservation activities was emphasised at the launch of the Bangladesh Platform on Biodiversity Conservation by the Bangladesh National Committee of IUCN in Dhaka on Monday.The programme, first of its kind in Bangladesh, witnessed a rich brainstorming on the state of biodiversity in the country and the importance of its conservation for sustainable development. Planning Minister Muhammad Abdul Mannan was the chief guest at the programme, chaired by Hasna Jasimuddin Moudud, chairperson, Bangladesh National Committee of IUCN members at a local hotel.
It was addressed by specialists, foreign diplomats in the midst of a wide array of environmentalists, water experts, NGO representatives, members of the academic, Social and news media organizations.
Abdur Rob Mollah, chairman of nature conservation management (NACOM) called for coordination of biodiversity conservation activities. The law should be strengthened and a biological diversity surveys undertaken to create a database. In India and Pakistan there were zoological surveys but hardly any survey was done in BD.
Dr. Mokhlesur Rahman of the centre for natural resource studies dwelt on wetlands and biodiversity and said that watershed is not properly managed in the country to reduce adverse effects on wetlands. The haors are not properly managed. Shrimp farming affects biodiversity, she said.
Speaking on river and biodiversity Shamim Sonneya Murshid of Brotee said the rivers are the zones of highest biodiversity concentration in Bangladesh. Rivers form the lifeblood of the country. Bangladesh owes its origins to rivers.
She underscored the need for a nationwide survey of rivers and wetlands for a database. None of the four rivers basin systems, the Ganga, the Brahmputra, the Meghna and the South Eastern Hill basin is in good shape, she said. With death of rivers people migrate, fishes, aquatic biodiversity disappears. Biwta says 200 rivers have died. The number must be much higher, she said.
Referring to the landmark judgment declaring rivers living entities, she said, ‘We have to protect them. We should stop the abuse of the rivers. The whole world is decommissioning dams, only South Asia builds more and more dams. Rivers should not be dealt with commercially she said calling for planning for the rivers having the strongest linkage to biodiversity.
Rashed Al Mahmud Titumir, chairman, Unnauan Onneshan, in his keynote address explained the necessity of the platform for biodiversity. The world is pursuing sustainable development which has to move beyond environment conservation. This can be achieved through knowledge generation and implementation acquired knowledge in the field plus interaction with the government.
He said IUCN BD can’t cover all areas and has focusses on three – Forest ecosystem, river and wetland ecosystem plus marine and coastal ecosystem.
There is a relationship between people and biodiversity. Indigenous and local knowledge has to be viewed at par with scientific knowledge, he added.
The Ambassador of Germany in Bangladesh, Peter Fahrenholtz said that govt of Germany is ready to support this effort. In his home country the Green Party has become the most popular and a future Chancellor likely from this party, he said. Lauding the economic growth in Bangladesh he said that the objective of economic growth is not merely to increase profits of companies but to ensure welfare of the people. People’s welfare also benefits politics, he added.
Referring to encroachments on rivers, he said that the private sector must abide by law and rules. There should be rule of law and adherence to it. Ramphal is a conflict between dev needs and biodiversity of the Sudarbans. ‘We spent a lot of money to clean the Rhine which was dangerously polluted 50 years ago. Now it’s so clean one can drink its water as a test.
Dr Azharul Haq BWP, Nasreen Fatema consul of Mongolia, Khurshid Alam Assistant Resident Representative of UNDP, Norwegian Ambassador Ms Sidel Bkeken, Dr. Mujibur Rahman Hawladar, chairman, National River Conservation Commission, Raquibul Amin and Nilufar Banu of IUCN Bangladesh spoke at the programme among others.
The National Committee of IUCN members honoured Mahfuz Ullah posthumously with an award for his environmental achievement. Prof. Mahbubullah, his elder brother, received the award on behalf of the family of the deceased.
Mr Khurshid Alam Asst Residential Rep undp made mention of land degradation in BD as elsewhere in the world and stressed the need to implement the Rio convention in full.
He said experts must think whether humanism should remain the objective in global discourse as well as Bangladesh. ‘We need to bring back environment as core agenda of donors to development projects.’
The Norwegian ambassador said biodiversity conservation is a global issue but needs local action. Addressing biodiversity is important also for SDGs, she said urging to give the endangered species a voice.
Abdul Mannan, minister for Planning, said Bangladesh has its own Green Climate Fund, and the government wants to develop the country taking all on board. Those who come shall come, those who don’t will be viewed as being with us. About Ramphal he said, ‘we have to reach power to the people. So far distribution of power to 92pc of the people has been achieved, ‘this year we want to achieve 100pc’. The government ready to support research on local flora and fauna, the minister added.