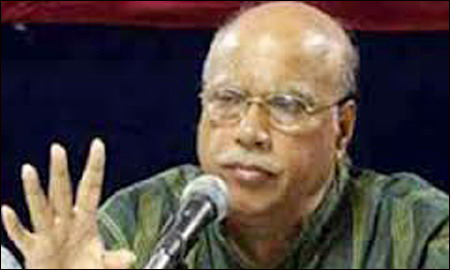 Awami League presidium member Mohammad Nasim on Saturday alleged that BNP was spreading propaganda after knowing its defeat in the polls to four city corporations.“Through spreading propaganda, they’re trying to create a political ground. As far as we know, the elections were held in a fair manner,” he said.
The ruling party leader was addressing a press conference at Awami league President Sheikh Hasina’s political office at Dhanmondi in the city.
Earlier, at a press briefing, BNP joint secretary general Ruhul Kabir Rizvi said the government is crafting various evil designs, including intimidating the voters, to have the election results in favour of the ruling party-backed candidates.
Nasim termed the allegation ‘old technique’ of BNP to spread falsehood, and said elections so far held under the present government had been free, fair and neutral. “Country’s people are aware of vote rigging in elections, including the Magura by-polls, during the BNP regime. So, this type of allegation doesn’t match with BNP.”
“Awami League believes in democracy, not in vote rigging. Awami League will welcome the polls result whatever it might be,” he added.
Awami league leaders Dipu Moni, Jahangir Kabir Nanak, Ahmed Hossain and AFM Bahauddin Nasim were, among others, present in the press briefing. .(Source: UNB)