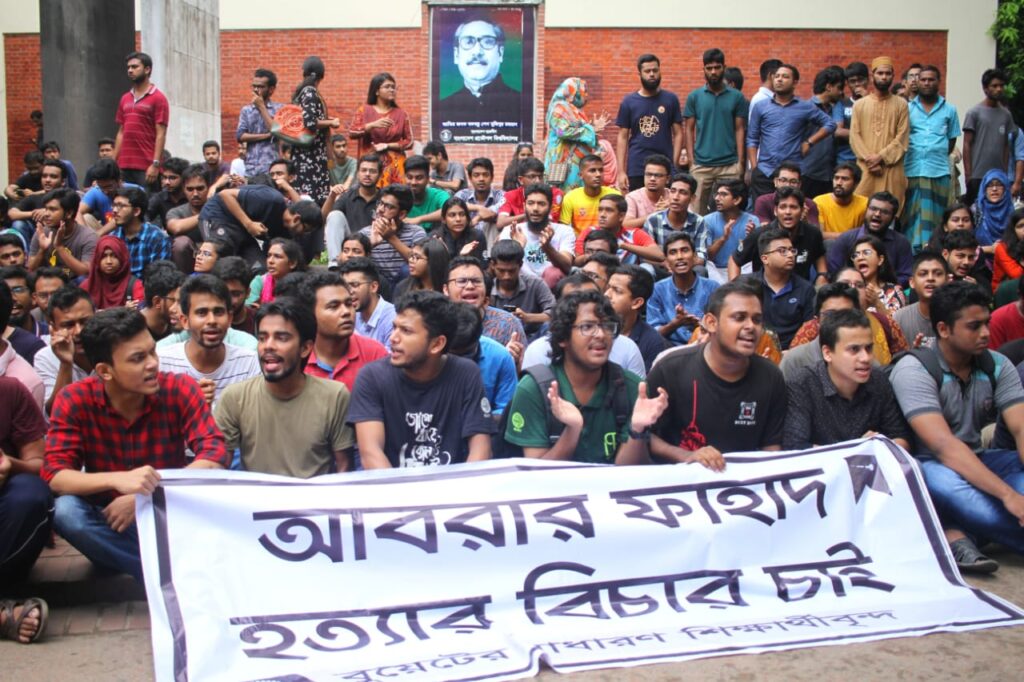 Students of Bangladesh University of Engineering and Technology (BUET) on Tuesday staged demonstrations and announced an 8-point demand, including arrest of all accused in Abrar Fahad murder case and their highest punishment.Agitated Buet students came out from different residential halls and gathered in front of the university’s cafeteria around 10 am to press home their demands.
Their other demands include expulsion of all identified killers from the university for life within 72 hours, trial of the case under Speedy Trial Tribunal, appearance of Buet Vice Chancellor before students within 5 pm today, expulsion of raggers who mentally and physically torture students for differences of opinions.
Students of seven colleges affiliated with Dhaka University form a human chain in front of Dhaka College in the city demanding justice for Abrar Fahad on Tuesday morning. Photo: Abu Sufian Jewel/UNB
Besides, withdrawal of Sher-e-Bangla Hall provost before 5pm for his ignorance about the incident of driving out some students from the hall using political power, bearing all expenses of Abrar murder case by Buet administration and compensation for the family of Abrar and banning party politics on the campus.
They vowed to continue their protests until their demands are met.
Besides, students of seven colleges affiliated with Dhaka University formed a human chain in front of Dhaka College seeking justice for Abrar Fahad.
Abrar, 21, a resident of Sher-e-Bangla Hall of Buet was pronounced dead around 3am on Monday by Buet medical officer Dr Md Mashuk Elahi after he was mercilessly beaten allegedly by some Bangladesh Chhatra League (BCL) activists of the university unit.
Police arrested nine leaders and activists of BCL in connection with the killing of Abrar on Monday and his father filed a case against 19 BCL men with Chawkbazar Police Station, reports UNB.