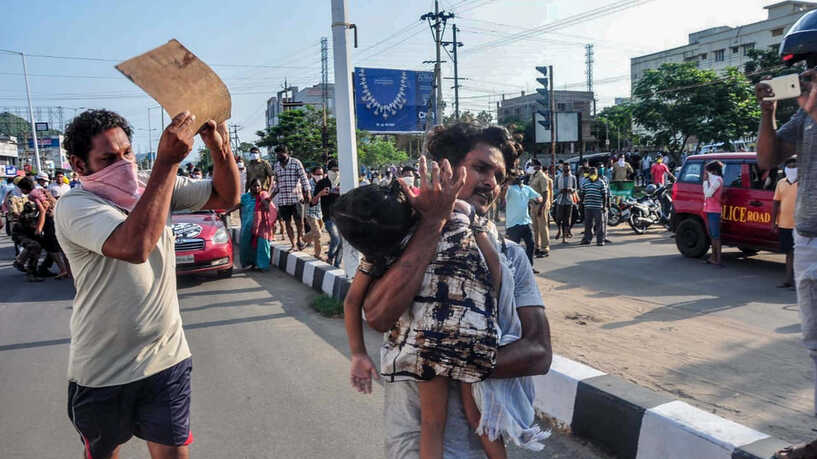 Hyderabad, AP, India – A gas leak at a chemical factory owned by a South Korean company in southern India early Thursday left at least 11 people dead and about 1,000 struggling to breathe. The chemical styrene used to make plastic and rubber, leaked from the LG Polymers plant in the city of Visakhapatnam in Andhra Pradesh state while workers were preparing to restart the facility after a coronavirus lockdown was eased, officials said.
Videos and photos from the area showed dozens of people, including women and children, lying unconscious in the streets, arms open wide with white froth trailing from their mouths. The scene evoked bitter memories of a major industrial disaster in 1984 that left at least 4,000 people dead and 500,000 injured, according to government figures, when methyl isocyanate leaked from a Union Carbide India pesticide plant in Bhopal in central India.
Hundreds of people fled from Thursday’s gas leak, some on motorbikes and others carried in open trucks. Some who couldn’t find vehicles raced away barefooted, many with small children slung across their shoulders.
Police officers, some wearing gas masks, rushed from house to house and evacuated about 3,000 people. Struggling to breathe, many people lay on the road as passersby helped them with water.
“No one could breathe. I couldn’t see anything for some time,” Vijay Raju, a local resident, said by phone. “For a moment, I thought I would die.”
The leak was suspected to have come from large tanks left unattended because of the strict coronavirus lockdown over the past six weeks. The lockdown was eased Monday, allowing neighbourhood shops and factories to resume activities.
“Our initial information is that workers were checking a gas storage tank when it started leaking,” said Industries Minister M. Goutham Reddy.
Residents said the gas leak began about 3:30 a.m. when they were woken by a pungent smell.
Officials said a blanket of gas spread over a radius of about three kilometres, sickening people in at least four villages. Rescuers broke open the doors of village homes that were locked from the inside and found some people who had collapsed and transported them to hospitals.
The leak was stopped by 8 a.m., officials said.
Residents were advised to cover their noses and mouths with wet masks and stay indoors.
A neurotoxin, styrene gas can immobilize a person within minutes of inhalation and can be deadly at high concentrations.
Police Commissioner R.K. Meena said about 100 people were hospitalized and in non-life-threatening condition.
LG Chem Ltd. is South Korea’s largest chemical company and is part of the LG Corp. conglomerate. The company said it was cooperating with Indian authorities to help residents and employees.
“The gas leakage is now under control, but the leaked gas can cause nausea and dizziness, so we are investing every effort to ensure proper treatment is provided swiftly,” LG Chem said in a statement.
It is looking into the cause of the leak but won’t know exactly until Indian authorities complete their investigation, company official Song Chun-seob said.
The Visakhapatnam plant is a leading manufacturer of polystyrene plastic in India. It employs around 300 workers, but Song said the victims appeared mostly to be local residents.
The bowl-shaped coastal city, an industrial hub, is known for frequent gas leak accidents. In December 2019, a leak from a pharmaceutical company killed two people.
B. Sengupta, a retired scientist who used to head the Central Pollution Control Board, said it appeared that normal safety protocols had not been followed while reopening the LG Polymers plant.
“When you’re working with a skeleton staff, due to social distancing measures, the management should have been additionally careful and followed standard safety protocols,” he said.
Sengupta said the unusual situation of chemical plants being shut for weeks meant the risks of such incidents would increase.
Hours after the gas leak at Visakhapatnam, seven workers at a paper mill were hospitalized in the central state of Chhattisgarh after a reported gas leak. Three were in critical condition.
“We have not learnt from our past mistakes,” said E.A.S. Sarma, a former senior official of Andhra Pradesh state, referring to the 1984 Bhopal gas leak.
Considered the world’s worst industrial accident, the leak at the Union Carbide plant prompted successive Indian governments to pledge to improve safety standards. But many similar accidents, although on a smaller scale, continue across the country.
In Bhopal, more than 100,000 people remain chronically ill from the industrial accident that occurred 35 years ago, the government says. – AP via VOA News