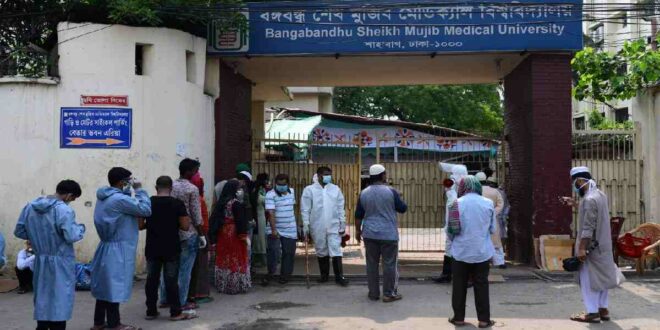 Dhaka, Mar 26:  Bangladesh on Friday reported its highest daily coronavirus cases since July last year.
The health authorities confirmed 3,737 cases in the last 24 hours, highest since July 2 last year when the country reported 4,019 cases.
On Friday, the daily infection rate rose to 13.69% from 13.26% on Thursday.
Meanwhile, 33 deaths reported today pushed the country’s tally to 8,830. Twenty-six of the deaths were reported from Dhaka, six from Chattogram and one from Rajshahi.
The death rate is currently 1.5 percent, the Directorate General of Health Services said in a handout.
So far, the government has confirmed 588,132 cases but 531,951 (90.45%) of them have recovered, including 2,057 new recoveries.
The country has so far tested 4,542,030 samples – 27,299 in the last 24 hours.
Bangladesh reported its first coronavirus cases on March 8 last year and the first death on the 18th of that month.
The country launched a countrywide vaccination drive on Feb 7. As the daily infection rate rose, the government extended the ongoing shutdown of educational institutions and announced to reopen them in May, reports UNB.