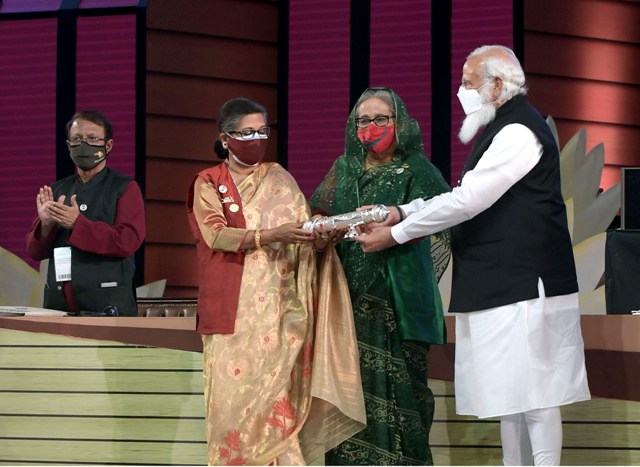 Dhaka, Mar 26: Prime Minister Sheikh Hasina on Friday said India, being the largest country in the region, needs to play a pioneering role in building a stable and politically and economically vibrant South Asia.“If we move forward hand in hand, the development of our people is inevitable,” she said while chairing the closing ceremony of the 10-day festival in presence of her Indian counterpart Narendra Modi as the guest of honour.
President Abdul Hamid attended the concluding ceremony in the city’s National Parade Square as the Chief Guest.
The 10-day nationwide programme started on March 17 with the theme ‘Mujib Eternal’, marking the birth centenary of Father of the Nation Bangabandhu Sheikh Mujibur Rahman and Golden Jubilee of the country’s Independence in the Mujib Year.
Sheikh Hasina said South Asia is the most densely-populated area but there are huge resources in this region. “If we all utilise the resources, we’ll be able to build it as a hunger-poverty-free region.”
She urged all to make a vow to work together forgetting all differences for the welfare of the peoples in South Asia.
“At this auspicious moment of celebrating the birth centenary of the Father of the Nation and the Golden Jubilee of independence of Bangladesh, let us pledge to forget all differences and work together for the welfare of our peoples,” she said
“Our foreign policy formulated by the Father of the Nation is that ‘Friendship to All and Malice towards None’. We’re determined to establish South Asia a developed and prosperous region,” the Prime Minister said.
Relations with India reaches new heights
Sheikh Hasina said the bilateral relations between Bangladesh and India have escalated to new heights. “Our relations with India have now escalated to new heights,” she added.
Lauding Narendra Modi’s ‘neighbourhood first’ policy, she said, “He sent coronavirus vaccines as gift to the neighbouring countries, including Bangladesh, which was a reflection of that policy of Modiji.”
She said Bangladesh has increased cooperation with India in various sectors including trade and commerce, communication, power, energy, and agriculture during the last few years. “India has now become one of our development partners,” she added.
The Maitree Bridge over Feni River has recently been inaugurated to increase connectivity between the North-Eastern Indian states and Bangladesh. These Indian states are now able to use the Seaport and Airport of Chattogram, she said adding that India can also use the Mongla port, reports UNB.